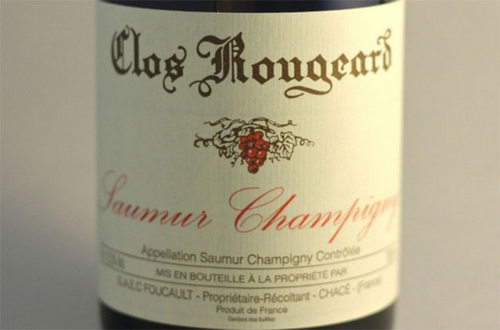 Clos Rougeard is a cult estate that produces one of the best Cabernet Francs in the world. The estate has been in the family for generations. The Foucault brothers (Nadi and Charlie) took responsibility for the property in 1969. They tend exceptional vineyards, harvest at small yields, vinify in barrel and let the wines bubble for a couple of years (18-24 months, depending on the vintage ) in a glacially cold cellar and bottle without filtration. And what you get is the some of the top red wines of the Loire Valley and in the very top of France as a whole.

Charles Joguet, the great winemaker of Chinon, once said: “there are two suns. One shines outside for everybody. The second shines in the Foucaults’ cellar.”

Here’s what Clive Coates MW had to say: "Every so often, for reasons which at first are difficult to explain, you come across someone in a relatively minor appellation who produces extraordinarily good wine. Even when you get there, lured by magnificent bottles you have sampled elsewhere, you find it hard to answer the basic question:  why are these so good?  What is it about this particular domain which makes it so special? What do they have, in terms of terroir, and what is it that they do with it, that produces such excitement? One such is the Saumur-Champigny domaine of the brothers Charly and Nady Foucault. The headquarters of Clos Rougeard lie in the middle of the village of Chacé. A courtyard provides access to a ramshackle collection of modest and dilapidated farm houses and barns beneath which is a rabbit warren of galleries and cellars hacked out of the underlying tuffe, the limestone base rock of the Saumur-Champigny appellation.   The whole set up is artisanal in the extreme, old fashioned in the very best sense. The vineyards are ploughed. No herbicides or artificial fertilizers have ever been used.  Yields are naturally very low. The fruit is completely de-stemmed, with a triage both before the harvest and afterwards. There is never any chaptalisation or acidification, and the wines are fermented slowly, over as long as six weeks, at temperatures which can rise to 33°C, with both pumping over and treading down, by feet, naturally, not machine. The vin de presse is not used, and the wines undergo malo-lactic fermentation in barrel. Bottling takes place without fining or filtration after 18 months to two years. These are substantial wines, but without over-extraction. They are oaky, but not exaggeratedly so. They have remarkably sophisticated tannins. They have excellent grip and very fine, very concentrated fruit. They are pure, harmonious and elegant. All this adds up to a wine which would put much of Bordeaux to shame, as well as something which stands as high as any other red wine domaine in the Loire valley."

Clos Rougeard has always been farmed organically, mainly because seven generations of Foucaults, who lived in the same house and used these same cellars, farmed in this exact manner since the 17th century.  They are now certified Biodynamic. There are several vineyard plots at Clos Rougeard: the Clos, 10 acres of assorted smaller plots of Cabernet Franc, Poyeux, a 6 acre Cabernet Franc vineyard on sandier soils with vines around 50 years old, Bourg, a 2.5 acre plot of old vine Cabernet Franc close to 80 years old and on a soil of clay over gravel and Brézé a 3 acre plot of Chenin Blanc.

In addition to farming without any chemical additives the grapes are harvested by hand in small crates but unlike most of his neighbors who routinely pick over a period of a couple of weeks, Nadi and his brother Charlie pick within a couple of days once they decide the grapes are at peak maturity. They accomplish this by enlisting a team of over fifty pickers at each harvest to get the grapes in as soon as possible. The first selection takes place in the vineyard then the clusters are sorted back at the winery, destemmed, then the fruit is sorted a third time before being crushed and fermented in barrel. Pigeage and pump overs are done to break up the cap, not for extracting. In fact when Nadi was talking about this very point he quoted a famous Burgundian who said, "Great wine is concentration and finesse, but do not confuse concentration with extraction or finesse with dilution." Skin contact varies by cuvée with Bourg seeing up to six weeks and Clos and Poyeux between four and five weeks. Only free run juice is racked into barrels for aging.

But with the passing of Charly in December, 2015, and the subsequent sale of the domain two years later, the eight-generation-old Foucault family domain in Saumur came to an end. And the wines have become scarce to the point of being virtually unobtainable.  But the reverence accorded Clos Rougeard has created great scarcity for all the wines. Little was ever made, and most of it stayed in France, doled out to Michelin-starred restaurants and loyal private clients. Today, with Clos Rougeard fever at its zenith, and no new post-2016 vintages bearing the Foucault touch, the wines are more difficult to find than ever.