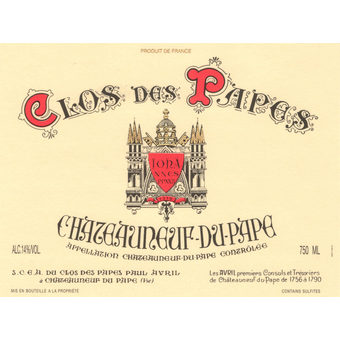 Clos des Papes (Paul Avril) has a long history in the region thanks to the first Paul Avril. Avril was born in 1873 and passed away after 91 great years in the appellation. In fact, Avril was one of the key people responsible for the official birth of the Chateauneuf du Pape appellation. Avril began producing and selling Clos des Papes all the way back in 1896. However, the Avril family has a much longer history in Chateauneuf du Pape that can be traced back to the 18th century.
During the second half of the 1700’s historical records show references to members of the Avril family having acted as treasurers and municipal consuls. Clos des Papes was one of the first estates in Chateauneuf du Pape, as well as in all of the Rhone Valley to produce, bottle, and sell their own wine. Their first wine bearing the Clos des Papes label was released in 1896!
The second Paul Avril joined Clos des Papes in 1963. He passed away in 2009.  The current owner and director is Paul Vincent Avril, who was born in 1965. He started to work at Clos des Papes in 1988. Paul Avril trained at several other wineries before joining the family business at Clos des Papes. Paul Vincent Avril even had a stint at Chateau Mouton Rothschild in Bordeaux where he learned more about winemaking and the trade. It could be said that Paul Avril is a modern traditionalist. On the one hand, he destems the grapes, seeks low yields and does not filter. On the other hand, Paul Vincent Avril eschews new oak and would not consider producing a high-end cuvée.
His staunch philosophy is that would only serve to harm their main brand, which is Clos des Papes, a wine that has been produced for more than a century.
The vineyard of Clos des Papes consists of  100 acres of vines that are spread over 24 separate parcels in the Chateauneuf du Pape appellation for the production of their wine. 80 acres are used to plant grapes for their red Chateauneuf du Pape. Part of what makes the wine of Clos des Papes special is the range of different terroirs and soils in which their vineyards are located. The vineyards of Clos des Papes have a wide array of terroirs ranging from the rocky soils of La Crau to areas of sand, limestone, and gravel soil.  They also have some of their best Grenache vines planted in sandy soils in the west and southeastern part of the appellation. In the northeastern part of the appellation, you find they have more of their vines planted on soils littered with rocks, stones, clay, and limestone. It is the blending of these diverse terroirs and the different grape varieties that create Clos des Papes.
The wine has the ability to age and evolve for two decades or more. It is the goal of Clos des Papes to always include a large portion of Mourvedre in the blend whenever possible, for its spicy qualities and structural backbone. On average, the vines are at least 50 years or older. Yields are kept low. Clos des Papes co ferments all their different grape varietals. Vinification takes place in temperature-controlled, stainless steel tanks. The wines are fined and not filtered. The wine is aged in old foudres for about 15 months before bottling.
19/20 Jancis Robinson   For the first time since 2001, Vincent Avril assembled the wine before putting it into his precious foudres because the crop was so small. The resulting blend is 55% Grenache (as opposed to the more usual 65%), 30% Mourvèdre, 15% Syrah (more than usual). After an extremely tricky year in the vineyard, the vinification was easy. Strict selection was needed because the vines were not in perfect shape. I tasted wines from a range of foudres and found them truly beautiful. It was the energy that was so remarkable after notably meaty, savoury aromas. Muscular, absolutely not heavy on the Grenache, these wines were very different from usual. Very ripe and cool but not skinny. Lovely polish but not over 'made'. Admirably supple and refined. Even elegant. He says 'Burgundian' (his highest form of praise).
95 points, Vinous   Vivid ruby-red. Potent raspberry, potpourri and garrigue scents expand with air, picking up smoke and mineral nuances and a hint of olive. Sweet and seamless in texture, offering intense cassis and red berry compote flavors and a touch of licorice. Blends richness and vivacity smoothly, finishing spicy, focused and very long, with dusty tannins adding grip.
94 points Wine Spectator  Very juicy and lively in feel, with pepper, tobacco and bay leaf notes leading the way for a core of raspberry, bitter plum and red currant coulis flavors. The long finish lets the pepper and tobacco notes play out, with pleasant acidity embedded throughout. Very Provençal in feel. Best from 2017 through 2026.
Category: High End Red