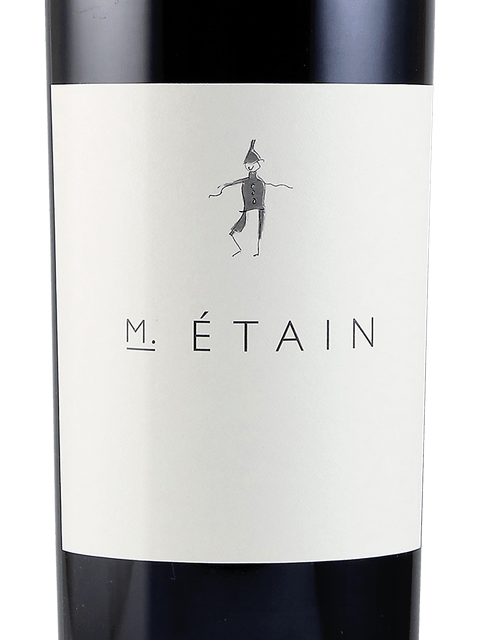 From the LA Times:  "The 70-year-old vines known as “the old men” have twisted and bulged over the years, their roots deep in that good Rutherford Bench soil. Birds and other creatures have made a home in the folds and crevices of the vines that make an extraordinary Napa Valley Cabernet called Scarecrow. Bret Lopez would know. He’s known these vines since he was a child and spent his summers here with his grandfather, J.J. Cohn, one of the five men who built MGM.

The vines are just beyond the grassy circle in front of the 1875 Cape Cod-style house where Lopez lives with his wife, Mimi DeBlasio. The old men were planted in 1945, not long after Cohn, then head of MGM Studios, bought the place as a summer retreat for his family.
J.J. Cohn winery: An article in the March 28 Saturday section about the origins of Scarecrow and M. Etain wines referred to vineyard founder J.J. Cohn as head of MGM Studios. Cohn was head of production for MGM. It also said Cohn produced MGM’s “The Wizard of Oz.” Cohn was one of the producers, but his work was uncredited.

Bank of America founder A.P. Giannini had recommended Napa Valley for its quiet beauty, telling Cohn it was mostly prune orchards and a few vineyards. The train from Union Station would stop at the edge of the property where Cohn’s butler would be waiting with a tray of cocktails.

Seventy years later, the old men endure, though a few are lost every year and replaced. Planted on the original St. George rootstock, which most vintners pulled out in the ‘70s, the vines give grapes of such quality they’re legendary in the valley. Cohn had never made a wine, though. He sold the grapes, and they went into some of the valley’s most esteemed wines — Opus One, Phelps Insignia and Robert Mondavi Private Reserve, among others.

After Lopez inherited the property and had to buy out his sister (with the help of Francis Ford Coppola, who owns adjoining Inglenook), he realized he’d better make some wine in order to pay the daunting property taxes.

The Los Angeles photographer knew nothing about wine, so he got some winemaker names from a sommelier friend. The last name on his list was Celia Welch, who said flat out she couldn’t consider adding another client. Until he mentioned that his little vineyard was J.J. Cohn’s. She’d worked with the grapes and knew how extraordinary they were. She dropped a client.

In 2003, she made the first wine ever made entirely with the estate’s grapes. Lopez and DeBlasio named the Cabernet Sauvignon Scarecrow after the film “The Wizard of Oz,” which Lopez’s grandfather produced. Influential wine critic Robert Parker gave it 98 points — then his highest score ever for a new release. The following vintage sold out in 16 hours.

Last year at the Napa Premiere auction, a five-case lot of a one-time 2012 Scarecrow Cabernet called “Toto’s Opium Dream Scene III,” made entirely from the old men vines, sold for a record $260,000, or $4,333 per bottle, to the Wine House in West Los Angeles. It was an extraordinary price for an extraordinary wine.

The tonalities of the wines are similar. Winemaker Welch considers the two wines brothers: “Scarecrow for me is more finely woven, silkier, more fine-grained, whereas Étain is more gregarious, lovely, maybe a little less sophisticated.”

How long will the old men live? Nobody knows. Lopez and Welch live in terror of a major weather event such as the freak windstorm that leveled the massive 300-year-old oak in front of the house a few years ago. That’s why they’ve taken grafts from the old men to plant a new vineyard. Dry-farmed, the 10-year-old vineyard sits on the same piece of land and, according to Welch, maybe even better.

“We used to have an orchard,” Lopez complains, teasing Welch. “How much fruit do you really need?” she throws right back. Because when you have the chance to make wines like Scarecrow and its little brother, Monsieur Étain, who needs an orchard?"

94 points, Jeb Dunnuck  Rocking crème de cassis, flowery incense, smoked tobacco, and a touch of chocolate all emerge from the 2017 M. Etain, which has the classic elegance of this cuvée paired with medium to full-bodied richness, ultra-fine tannins, and just terrific overall balance. It picks up plenty of minerality on the finish, and while approachable today, it will drink well for 20 years or more. The blend is 84% Cab Sauvignon, 8% Malbec, 5% Petit Verdot, and 3% Merlot, all from the estate in Rutherford, that spent 18 months in 70% new French oak.

94 points, Vinous   The 2017 Cabernet Sauvignon M. Étain is ripe, unctuous and flashy, with exotic beauty and tons of allure. Super-ripe red cherry, kirsch, plum, rose petal, mocha and licorice all run through the 2017. This is the first vintage in which M. Étain is a Cabernet Sauvignon-based wine rather than a pure Cabernet. The 2017 is rich and fabulously lush, with superb balance and loads of appeal. It's hard to describe a $200 wine as under-the-radar or overdelivering, but M. Étain has really been impressive these last few vintages, and 2017 is no exception. Scarecrow fans will love it - of that I have no doubt.