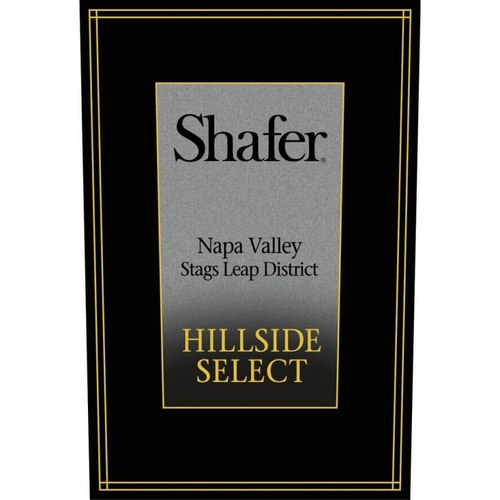 Shafer's legendary Hillside Select Cabernet Sauvignon is sourced from a collection of 14 small vineyard blocks planted within an eons-old amphitheater-like structure of rock and volcanic soil that surrounds the winery. Thanks to scant soil nutrients and moisture, yields at harvest are meager and the berries are small, about the size of blueberries. This Stags Leap District site’s combination of rugged, arid soil and climate results in lush Cabernet Sauvignon fruit with dark color and intense, classic flavor.

Sheer rock walls tower along the eastern boundary of Shafer’s hillside estate vineyards, reflecting the warming rays of the afternoon sun and channeling cool breezes off the bay. These are the Stags Leap palisades from which this small appellation takes its name. They create a craggy amphitheater that is home to Shafer Vineyards and stand as a silent testament to the eons-old history of the place.

On this remote site, Cabernet Sauvignon vines prod their roots through thin, volcanic soil before hitting the weathered bedrock below. Thanks to scant nutrients and soil moisture the yields are meager; the berries at harvest time are small, about the size of blueberries. They’re dark and intensely flavored.

Shafer’s property has been the site of vineyard cultivation since the 1880s, but it wasn’t until the 1970s when John Shafer came to Napa Valley looking for a hillside site, that vines were planted on these rock-choked slopes.

Napa Valley viticulture was a different world in the 1970s when Shafer acquired the neglected vineyards planted 50 years earlier by a farmer named Batista Scansi. White varietals sometimes grew side by side with red, modern trellising was unknown, and existing vineyards had been planted with little regard to what is now known about the relationship between terroir and varietal. On the Shafer property, vine spacing of the original hillside vineyard was on an 8 x 8 foot grid and cross cultivation by tractor proved perilous, as the machine side-slipped down the rocky slope.

Planting the steep upper vineyard called for dynamite to uproot truck-sized boulders and clear the land for planting, actions that earned the precipitous vineyard block its name of “John’s Folly.” Today, John’s Folly is the grand-dad of the hillside Cabernet blocks, an important component of Hillside Select Cabernet. It comes as no surprise that many of the vineyard blocks bear the names of favorite ski runs, one of them Sunspot, named after a challenging slope in Alta, Utah.

Made from a single varietal, 100% Cabernet Sauvignon, Hillside Select gains complexity from the variety of clones and rootstocks planted in the vineyards, each of which adds its individual characteristics to the finished wine.

97 ++ Vinous  The 2014 Cabernet Sauvignon Hillside Select is one of the more restrained, understated versions of this wine I can remember tasting. Medium in body (in relative terms) and beautifully persistent, the 2014 makes its case more with a total sense of harmony rather than with bombastic power, as is sometimes the case. Moreover, the 2014 has really come together beautifully since I last tasted it. In 2014, Hillside Select is a wine of precision, with expressive aromatics and finely-knit tannins that support the mid-palate and finish nicely.

96 Points - Robert Parker's Wine Advocate: "Possibly the Cabernet Sauvignon of the vintage is Shafer’s 2011 Cabernet Sauvignon Hillside Select. Last year I thought it was a strong effort, but it’s even better now that it’s been bottled. With an opaque black/purple color and notes of subtle burning charcoal embers, blueberry, blackberry, and graphite, the wine has a certain Bordelais minerality, but then the richness of Napa kicks in. It’s full-bodied (somewhat unusual for a 2011) with lighter tannins, and no doubt the wine will be on a faster evolutionary track than vintages such as 2010, 2012, and 2013. Nevertheless, the Shafers and Elias said this was the toughest vintage they’d ever experienced. To be able to produce a compelling wine like this is a testament to their extraordinary skills and craftsmanship. This wine can be drunk now or cellared for another 15-20 years." - Robert M. Parker, Jr.

100 Points - Robert Parker's Wine Advocate: "Shafer’s flagship wine, and one of the world’s greatest Cabernet Sauvignons, is the Hillside Select, which comes from the rocky, volcanic soils on hillsides above the winery. Vineyard production is small, and the wine an incredible example of Cabernet Sauvignon. Aged in 100% new oak for 32 months and bottled unfiltered, this can generally be expected to be one of the top dozen or so Cabernet Sauvignons in virtually any vintage in Napa, and certainly possesses 25 to possibly 50 years of aging potential. The 2012 Cabernet Sauvignon Hillside Select is a perfect wine. It elicits more than a few “wows” when you smell the incredible notes of charcoal, graphite and subtle toast, buttressed and dominated by blackcurrant, blackberry and blueberry fruit. The purity of these fruits, the multidimensional mouthfeel, the seamless integration of acid, alcohol, tannin and wood are all flawless. The 2012 signature adds an extravagant opulence and density that is just mind-boggling, and the wine is a total hedonistic and intellectual turn-on already, although it has 30+ years of life ahead of it.

98+ Points - Robert Parker's Wine Advocate: "The 2013 Cabernet Sauvignon Hillside Select will probably hit the magic three-digit score, but it is a more backward style of wine, although probably even more concentrated than the 2012, and that’s saying something. Fabulous potential of 30-50 years is evident in this profound bottle of Cabernet Sauvignon that is inky blue/black to the rim and offers up notes of charcoal embers, scorched earth, blackberries, cassis, blueberries, a hint of coffee, and background barrique smells. Massively concentrated but incredibly elegant and poised, this is a wine of great energy and vibrancy. It is fabulously deep, built like a skyscraper, and set for an incredibly long life. Try not to consume a bottle for at least another 4-5 years and then watch the magic unfold." - Robert M. Parker, Jr