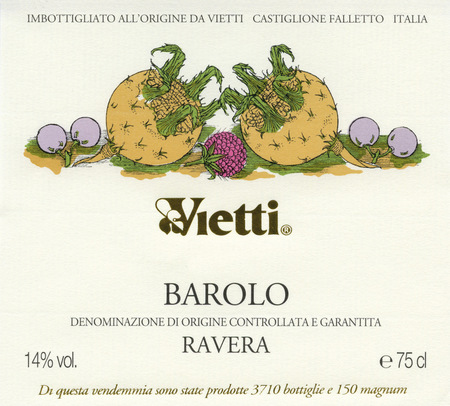 Located in the heart of the Langhe hills, at the top of the village of Castiglione Falletto, the Vietti wine cellar was founded in the late 1800's by Carlo Vietti. The estate has gradually grown over the course of time, and today the vineyards include some of the most highly-prized terroirs within the Barolo winegrowing area.

Although they have been making wine for four generations, the turning point came in the 1960's when Luciana Vietti married winemaker and art connoisseur Alfredo Currado, whose intuitions - from the production of one of the first Barolo crus (Rocche di Castiglione - 1961), through the single-varietal vinification of Arneis (1967) to the invention of Artist Labels (1974) - made him both symbol and architect of some of the most significant revolutions of the time.  His intellectual, professional and prospective legacy was taken up by Luca Currado Vietti (Luciana and Alfredo’s son) and his wife Elena, who have contributed to the success of the Vietti brand - universally recognized today as being one of the very finest Italian wine labels - by continuing along the path of the pursuit of quality, considered experimentation and working for expansion and consolidation internationally.

In 2016 the historic winery was acquired by Krause Holdings, enabling Luca and Elena, always at the head of Vietti brand, to add a number of prized crus to the estate’s holdings, and be able as a result to look to a future with new, stimulating prospects, all while maintaining the family approach for which the cellar has always been known.

The Ravera vineyard is located in Novello and is known for producing wines with higher acidity, which results with a vibrancy and mid-weight on the pallet.  Extremely age-worthy, Vietti's Barolo Ravera is powerful, yet elegant.

100 points Vinous: The 2016 Barolo Ravera is bursting with all of the tension that is the most singular characteristic of this site. Freshly cut flowers, white pepper and mint lend energy to a wine that is very shy and tightly wound today. Then again, it is Ravera. Macerated dark cherry, lavender, mint, crushed rocks and sage race out of the glass in a potent, stunning Barolo endowed with magnificent purity and translucency. The 2016 is quite simply a stunning, breathtaking wine. Don't miss it.

98 points Robert Parker's Wine Advocate:  The Vietti 2016 Barolo Ravera sees fruit from Novello in a site that faces the Novello castle up on the hill in the distance. This wine offers an impeccable balance between nose and mouth, showing immense purity and power all in one package. That harmony is sublime, and it forces the spotlight on Ravera, especially in a classic vintage such as this. This expression hits all the major cornerstones of a great Barolo, and this vintage does a great job of packaging it all together. Dark fruit, ephemeral spice, balanced acidity and elegant tannins are rolled into one beautiful wine.

98 points Wine & Spirits: Another exciting wine from Luca Currado’s 2016 releases, this one is from Novello’s Ravera cru, where Vietti owns 7.4 acres of vines with southwest exposures. Exuberant aromas of rose petals lead into taut red-cherry and plum flavors that are deep and penetrating. The flavors arrive in waves, propelled by cool acidity, laced with menthol and orange zest, all of it feeling fully integrated.