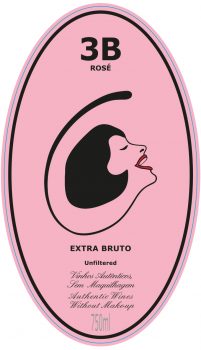 As daughter of Luis Pato, the master of the Baga grape in the Bairrada region of Portugal, Filipa was destined to be a winemaker.  She stepped out of her father's lengthy shadow in 2001 and makes beautiful wines. Her farming is biodynamic and she picks earlier than most. The vines are between 20 - 85 years old. Skin contact is minimal and the resulting wine is a pale ruby colour, light and refreshing.

This project consists of working on a total of 50 acres of vineyards scattered in various plots throughout Bairrada.

The D.O.C. Bairrada is located in Northern Portugal on the Atlantic Coast. It's Western border is shared with the Dão D.O.C. There are two predominate types of soil - a dark clay that favors red grapes mixed with pockets of limestone that create wonderful sparkling and white wines.
The Bairrada wine tradition is very old - dating back to at least the 10th Century exit of the Moors. The primary red grape of the region is the native Baga and the Atlantic influence leads to long hangtimes due to the cool, breezy nights.

A blend of 80% Baga and 20% Bical harvested early from assorted vineyards in Bairrada (the three “Bs” of the title). Primary fermentation with indigenous yeasts; base wine is unfined and unfiltered. Secondary fermentation via traditional method in bottle followed by nine months’ aging sur lies before disgorgement. No dosage.

The wine world is a wonderful place, but sometimes the name of a grape in one place is different than in another.  Take Portugal's Bastardo grape for example - it's much better known (to wine geeks anyways) as Trousseau, one of the two black skinned grapes that dominate in the Jura region of eastern France.

Bastardo not an uncommon grape in the Douro region - in fact it was once the most widely planted grape variety in the Douro but it is now a relative rarity.  The Douro is best known as the home of Port wines, and like Port, the grapes were crushed by foot in traditional granite lagares (large, low sided, open topped grape crushing and fermentation vessels), with no destemming and no added yeast or SO2. Once the alcoholic fermentation is complete the wine is racked in stainless steel tanks.

Pale-colored, light-bodied, yet intense with aromas of red fruits, herbs, sweet spices, and vanilla, this is perhaps the opposite of everything you'd imagine about Portuguese red wine. The small number of 50-year-old Bastardo vines were a passion project of winemaker Rita Ferriera's parents, and she's taken the wine to another level.   Very pale in color, it looks almost like a rosé. It has a beautiful, fresh, aromatic nose with a nice herby green edge to the bright cherry fruit. The palate is remarkable: even though this is a pale wine, it is intense, with a rounded texture and lovely spiciness. Fresh, super-elegant and persistent, this is a beautiful wine.

Conceito is a relatively new producer based in the Douro Superior. Young winemaker Rita Ferriera is allowed full licence to do her best with the grapes from her mother Carla Ferriera’s properties, and the results so far have been very impressive.  There are four estate vineyards, all in the Teja valley, which has climatic conditions a little cooler than the rest of the Douro Superior -  three fitty acre vineyards:  Quinta da Veiga, Quinta do Chão-do-Pereiro, Quinta do Cabido and a 25 acre vineyard at the top of the valley where there’s some granite, used solely for whites.

The first wines from the Conceito (which translates as ‘concept’) label were made in 2005; prior to this the grapes were sold to other producers.