Xarel·lo is a white grape variety of Spanish origin specially grown in Catalonia; and along with Macabeu and Parellada, is one of the three traditional varieties used to make the sparkling wine Cava. It also makes a bracingly refreshing table wine, as evidenced in this staff and store favorite.

Aged completely in stainless steel, Bohigas Xarel·lo is a light to medium-bodied wine, with crisp, fresh acidity and hints of citrus oil and green apple skins on the nose.

Made using organically farmed grapes, grown at high elevations, the juice macerates for a few hours in contact with the skins prior to being fermented in stainless steel vats. The wine sees no aging in tank before bottling, resulting in a fresh and clean wine with bright flavors.

Since the 13th century, the same family has been farming the land around Fermi Bohigas in the northern Penedes region of Catalunya at the foot of the majestic Monserrat range, about an hour northwest of Barcelona outside the town of Odena in the Anoia River valley. Jordi (father) and Maria (daughter) Casanovas are the 35th and 36th generation living on the property since the time of the Moorish occupation when the neighboring hillside served as the final outpost for the Catalans. The 650-acre estate is split between two properties, “Can Maciá” and “Can Batllevell”. Olive trees, wild garrigue, and 260 acres of grapes are grown on the two properties and the Bohigas wines come exclusively from the Can Maciá section.

The farming here is organic, and the northern and higher altitude location makes for a perfect micro-climate that tends to be cooler than the rest of the region. The old farmhouse adjoins a century-old winery that sits atop cave cellars that are still actively used for the production of sparkling Cava, which the family has been producing from only their own vineyards since 1929. The vinifications are done in modern, stainless steel vats with perfect control of temperature and cleanliness while the cellars are still used for hand riddling of the Cava bottles. 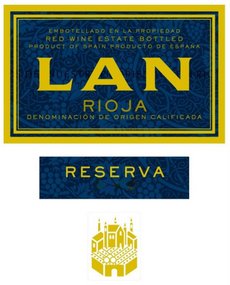 Bodegas LAN is a relative newcomer to the Rioja scene, having been founded in 1972. The name “LAN” is an acronym for the three provinces that make up Rioja: Logroño, Alava, and Navarra. LAN produces some of the most consistent, value-driven examples of Rioja on the market, and is also is an established leader on the premium side. LAN’s iconic  Viña Lanciano vineyard sits on a breathtaking natural meander along the Ebro river and is the basis for most of the company’s top bottlings. The spirit of experimentation and innovation permeates the culture at LAN, and winemaker María Barúa is continually pushing the limits and preconceptions people have of the region.

One of Rioja’s most celebrated Reserva bottlings, this comes from 25-year-old vines sitting in cool climate parcels in Rioja Alta and Rioja Alavesa. Varietal Composition: 92% Tempranillo 8% Mazuelo Elaboration: Fermented in temperature-controlled stainless steel tanks, the temperature of the fermentation 83°F – 86°F. 3 weeks maceration with constant pumping over in order to develop fruit and color. Aged in mixed barrels (American and French oak) for at least 18 months, followed by 21 months in bottle. Tasting Notes: Bright, ripe cherry red. Intense and complex in aromas. Aromas of ripe red fruit enveloped in white flowers, almond blossom, and broom. Touches of cinnamon and resinous notes. Velvety on the attack, smooth and delicate. It is elegant, balanced, and harmonious on the palate. A long finish, leaving a pleasant aftertaste that encourages you to take another sip.