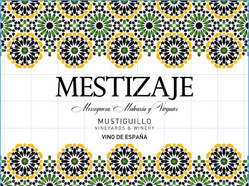 In 2017 I visited Spain on a wine buying trip with the folks at Valkyrie Imports; our second stop was in Utiel, in Valencia, to meet with Toni Sarrion, the proprietor and winemaker at Mustiguillo, an organic/biodynamic winery specializing in native grapes - mainly Merseguera for the whites and Bobal for the reds.

His entry-level blend is called Mestijaze for both the red and white, and the white is a blend of 75% Merseguera, with lesser amounts of Viognier and Malvasia. The wine undergoes native yeast fermentation in tank and is aged sur lies in stainless steel.  The Viognier is immediately apparent on the nose with apricot, tropical fruit, and honey while underlying notes of white peach, scented flowers, and citrus hints creep in from the Merseguera. The tightwire balance between the fleshy Viognier/Malvasia and taut Merseguera continues with a fresh, fruity, and floral attack and an unctuous mid-palate that is kept in check by bracing acidity. Truly one of a kind, Mestizaje shows its unique personality is this pleasant, crispy, imminently friendly wine  Mustiguillo is an organic/biodynamic Spanish winery specializing in native grapes - mainly Merseguera for the whites and Bobal for the reds.

Bobal is one of the greatest and most under-rated of Spanish grape varieties, and now on the cusp of a renaissance in the Mediterranean vineyards to mirror that of the Mencia varietal in Bierzo and other parts of North-West Spain.

91 points, Wine Advocate:  "The red 2018 Mestizaje was produced with a blend of 70% Bobal, 19% Garnacha and 11% full-cluster Syrah from head-pruned and dry-farmed vines from their El Terrerazo estate planted mostly in the early 1990s on limestone soils. Each plot and grape variety was fermented separately with indigenous yeasts in stainless steel and oak vats. It matured in a mixture of oak vats and French barrique for 11 months (there has been a change toward more and more vats and almost no barrels). This has a creamy touch, attractive, approachable and easy to understand, with some spiciness and a round palate. The tannins are fine and the wine comes through as neatly balanced with good freshness.”