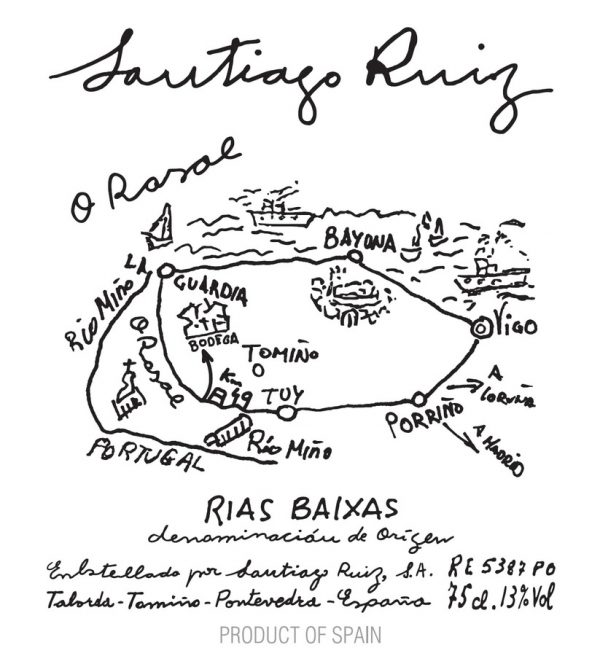 Most talk of Albariño wine inevitably leads back to talk of Bodega Santiago Ruiz and its founder, Mr. Santiago Ruiz, a man hailed as the “inventor” of Albariño wine.  Located in the district of O Rosal, the bodega is one of the leading producers in Rias Baixas. Santiago Ruiz was a visionary, decades ahead of his time.  In 1978 at the age of 70, retired from his everyday work obligations, he decided to devote his newfound free time to his real passion by following the tradition of his ancestors (His maternal grandfather was one of the first winemakers in Galicia, founding his own bodega in 1860).

A stout defender of the quality of native grapes, Santiago Ruiz became an ambassador for Rias Baixas’ wines, traveling the length and breadth of Spain (mostly on foot), with the clear objective of heightening awareness of Rias Baixas among the most select restaurateurs and opinion leaders of the early 1980’s.  He was convinced that Albariño could give rise to some of the best white wines in the world, and his trailblazing work has clearly made a mark in the wine world, with Rias Baixas Albariño now considered a “must have” on any thorough wine list or cellar.

The Ruiz family’s winemaking roots on Galicia’s Atlantic coast go deep. Ángel Ruiz, the grandfather of the eponymous Santiago Ruiz, was making wine here in the 1860s and was one of the first people to bottle wines from the region we now know as Rías Baixas. Santiago, however, was the first to market the Estate wines, selling his first twenty boxes of Vino de El Rosal to a restaurant in Vigo in 1981. Today, the Estate is run by Santiago’s daughter Rosa, aided by the winemaking smarts of Luisa Freire.

The core vineyards lie at Tomiño in O Rosal - the most southerly of Rías Baixas’ five subzones. Situated on the top lip of the river Miño (which marks the border with Portugal), O Rosal enjoys more sunlight hours and a drier climate than Rías Baixas’ other subzones. The vineyards here also benefit from cooling Atlantic breezes and the moderating influence and airflow from the river. Soils in O Rosal are predominantly sandy over granite bedrock, though they vary in texture. This set of natural circumstances favors a style of wine that is both ripe and mineral-laden at the same time, with the granitic soils and cool Atlantic nights providing crisp energy and drive.

A blend of mostly Albariño, this wine is refreshing, brisk, crisp, complex, and a lot of fun to drink.  Intense and complex aromas of blossom, pear, apple, and citrus fruit characters, anise seed, and some subtle spicy notes. Concentrated flavors on the palate are carefully balanced by clean acidity and stony minerality. Packed with flavor, it has a long and crisp finish.

The O Rosal sub-region is the most southerly in Rías Baixas, sited along the Portuguese frontier in the basin of the river Miño and extending from the Atlantic coast inwards towards the town of Tui. The vineyards are planted on terraces on the banks of the river on alluvial soils. Spread across the exposed sunny slopes of Tomiño and mimicking the traditional blend of an O Rosal wine, Santiago Ruiz’s vines are devoted to guyot-pruned plantings of Albariño, Loureiro, Caíño Blanco, Treixadura and Godello (in decreasing order).

A wine labeled with the sub-regional designation of O Rosal must contain Loureiro, and here (where the component hovers around 10%) the controlled yields of the variety bring ripe citric drive and notes of blossom to the blend. With an unusually high percentage of Albariño this year, it weighs in at 76% Albariño, 11% Loureiro and 5% Treixadura, with the balance Caíño Blanco and Godello. Each variety was individually fermented and raised for six months on lees in stainless steel before blending and bottling.

All the vineyards are sustainably farmed: harvesting is carried out by hand; organic fertilizer is the norm; cover crops between the rows are encouraged and pesticides and herbicides are banned. Santiago Ruiz was instrumental in introducing stainless steel to the region.