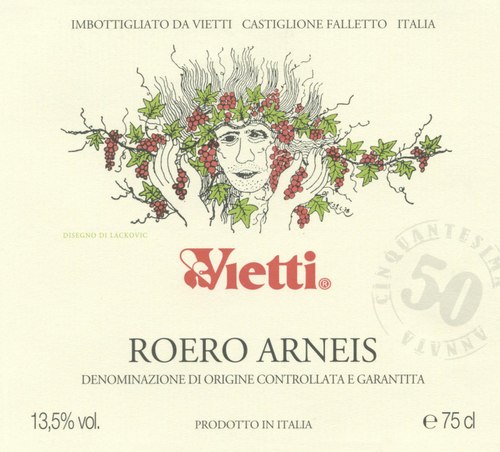 Today, Arneis is recognized as the best white wine grape in Italy’s Piemonte region, but it wasn’t always so.  In 1967, Vietti was the first to re-introduce this wine when the grape was being abandoned due to its difficult nature or was often used for blending. At the time, Arneis was also known as “Nebbiu Blanc” or white Nebbiolo.

The grape was nearly extinct as plantings had dwindled to a few vines here and there mixed in with Barbera and Nebbiolo.  When Vietti decided to try to make a varietal Arneis, they had to buy grapes from more than 20 growers to get enough fruit to fill a small fermenter.  They took cuttings from these vines, grafted them onto rootstock, and the basis for most if not all of the Arneis grown in Piedmont comes from this vineyard.

The grapes for this 100% Arneis wine are selected from vineyards located in the middle of the Roero area, in Santo Stefano Roero. The grapes are crushed, pressed, and clarified. Primary fermentation occurs in stainless steel autoclaves at lower temperature to preserve some natural CO2 from the fermentation. There is no malolactic and the wine is held in tanks until bottling, which preserves acidity and freshness in the wine.

The fruit comes from the top of the hills, and Vietti harvests at relatively low yields.  "In the old days,"  Vietti's Luca Currado told me over lunch several years ago "Arneis was vinified like Moscato - slightly sweet and slightly fizzy." Not now, it's a bright, lively, and aromatic white that goes well with many foods.

Arneis is perfect as an aperitif before a big dinner or as an accompaniment to appetizers of smoked fish or asparagus crostini. Nearly translucent in color, Vietti's Arneis is medium-bodied with dry but rich flavors of peach, pear and green apple. Meant to drink young with a certain degree of abandon.  Vietti farms all of its estate fruit organically - more than 40 single vineyards with vines up to 100 years of age.