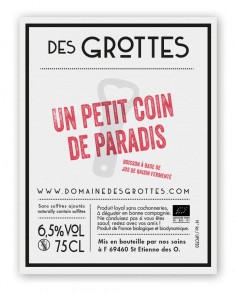 Romain de Grottes' farm in the southern reaches of Beaujolais produces wines, cereal grains, medicinal plants, and fruit juice.   The farm is certified organic and biodynamic, and his wines are produced without any additives whatsoever.

Back to the wine: Un Petit Coin de Paradis is 100% Gamay grapes from just south of Brouilly that have been direct-pressed, half-fermented, and bottled immediately to produce bubbles. Fermentation occurs with native yeasts, but there's a fair amount of residual sugar left in this wine. That also means it's quite low in alcohol (6.5%).
Sulfur is never used. It's perfect to accompany a cheese course after dinner, an aperitif,  a light dessert, or a cozy brunch.
Micro-production of under 1000 bottles. 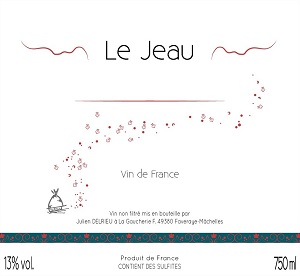 Julien Delrieu was the driving force behind a project founded in 2010 by three friends around the simultaneous purchase of 15 hectares of vineyards near the Layon river in the heart of the Anjou. They immediately went about converting the vineyards to organic farming, all the while honing there winemaking style and creating single cépage cuvées. The vineyards range in age from 25-60 years old and favor traditional Anjou varietals, Chenin, Cabernet Franc, Grolleau, and a bit of Cabernet Sauvignon. There are a variety of soil components throughout the vineyards, but schist, limestone, and clay dominate, as would be expected in this region.

The three partners decided to go their separate ways prior to the 2017 vintage which was subsequently destroyed by spring frosts. Each partner kept his share of the vineyards and struck out on his own.

The cellar techniques are fairly traditional with the addition of some skin maceration on the white wines and minimal use of sulfur. The goal of the domaine is to let each varietal and vineyard site speak for itself and to use only small amounts of sulfur to maintain freshness and balance. The result are wines that show both crisp acidity and brilliant focus and tension without being too wound up. Delicious wines with a clear sense of place.

Grolleau is an historic varietal of the Loire that, until recently, was generally over-cropped and used mostly for blending or producing cheap sweet rosé. In the right hands, however, it can produce a very bright sensual red wine, and blended with Cabernet Franc, as in this case, it rounds off the harder edges of the more tannic varietal and sweetens up the fruit just a bit. In the past 10 years, it has been experiencing a much-deserved renaissance in the Loire valley.

This dark wine shows telltale Cabernet Franc notes of schist-driven minerals that frame the sweet red fruit brought by the Grolleau. The tannins are well-coated but provide a fine gritty texture that make this wine remarkably food-friendly. Try with spicy food for a true revelation.

The name of the wine (A little corner of paradise) refers to the song La Parapluie  by French folk singer Georges Brassens, where the umbrella-weilding protagonist offers a little space out of the rain to a pretty Parisian mademoiselle who is getting soaked in a rainstorm.
Category: Organic/Natural