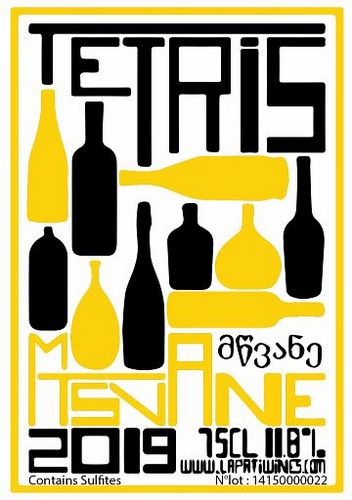 A few years back I was in the Republic of Georgia on a buying trip.  Mid-trip there was a large wine fair in Tbilisi, the capital. and we were invited to a party on the roof of a fancy hotel.  It was a very fun affair, and lots of wine was imbibed.  There were two guys speaking French nearby, and since speaking French is one of my few skills, and I was a bit in my cups, I introduced myself.   Turns out they were ex-pat winemakers who had just released their wines.  They were looking for American distribution.

I tasted the wines - and they were clean and pure, with a vibrancy and focus that I really liked.   Fast forward a few years, and the wines are finally in the States.

Vincent Jullien and Guillaume Gouerou are not only winemakers, they also ply their trade as graphic designers in Tbilisi, and their graphic sophistication sets them apart from most Georgian bottlings I know.

They produce their wines in a natural and environment-friendly way using the traditional Qvevri wine-making method.

The Tetris bottling is 100% Mtsvane, a natural unfiltered amber wine that saw two weeks of carbonic maceration, and eight months in Qvevri.

Aaron Rawlins, formerly a chef in Paris, came to Armenia because of the absence of Phylloxera, volcanic soils, and the very old vines. This bottling is 150 year old, head-trained, ungrafted Sev Areni vines located in Aghavnadzor at 4500+ feet above sea level, in the Vayots Dzor wine region.

Areni is a very old variety that most likely originates in the village of the same name in the west of the province of Vayots Dzor in southern Armenia, on the border with Azerbaijan, where it has traditionally been cultivated and where the oldest winery remains (from 4000 BC!!) have recently been excavated.

Areni, Armenia’s best variety, is widely used to make high-quality, medium- to full-bodied, ageworthy, dry and semi-sweet table wines as well as brandy and the occasional rosé in the east and south of Armenia and in Azerbaijan. This bottling is  fresh, sinewy, and minerally.

The Italian consultant Alberto Antonini, likens the variety to a cross between Sangiovese and Pinot Noir.