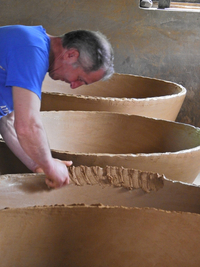 This month we're exploring two wines from Georgia. The country. Not the state. The oldest known evidence of wine-making hails from the country wedged between the Black and Caspian Seas, where wine has been made for over 8000 years!!

Merab Ediberidze is a winemaker in Imereti, Western Georgia who works with the indigenous variety Krakhuna.  He has about an acre planted to Krakhuna and Tsistka grapes, and produces only 2000 bottles per year - completely naturally

This medium-bodied, structured amber wine spends six months on the skins in qvervi. Aromas of orchard fruits, black tea, and apricot leather, with medium tannins.  With all amber/orange wines, chill if you'd like, but most Georgians drink their wines at about 55 degrees F.

Kvevri/qvevri - also known as churi in Western Georgia - are large earthenware vessels used for the fermentation, storage and aging of traditional Georgian wine. Kvevri were the first vessels ever to be used for wine fermentation, with archaeological finds dating back to 6000 BCE.  Resembling large, egg-shaped amphorae without handles, they are either buried below ground or set into the floors of large wine cellars. Kvevris vary in size: volumes range from 20 liters to around 10,000; 800 is typical.

It's traditional in Georgia to ferment white grapes on their skins, adding tannin and color just like red wine. We generally refer to that style as Orange Wine, however the Georgians use a term that directly translates to Amber Wine, a more accurate description of both color and taste expectation.

Pheasant's Tears, located in the Eastern town of Kakheti, is a joint effort of American John Wurdeman, Georgian Gela Patalishvili, and Swedes Erik Andermo, Jakob Mörndal, and Henrik Callerstrand, founded to preserve and promote this amazing cultural legacy of winemaking in the Republic of Georgia. All of their wines are fermented and aged in buried earthenware amphorae, called qvevri (or kvevri), some vessels dating back to the mid-19th Century. Maceration time depends on varietal and the size of the qvevri and varies between 3 weeks and 6 months.

The Saperavi is intense in color and flavor. It can be an austere wine (think old-school Bordeaux) so decant if you're able. Raspberries, dried currants, and toasty almond are the primary notes. You'll want a piece of roasted meet to accompany this wine. Rich sauces and mushrooms work as well.