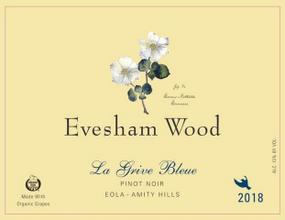 Winemaking in Oregon is relatively new, only dating back to the 1960s. However, their Pinots in particular have boomed in popularity recently, and it's easy to see why: Oregon has a similar latitude and climate as Burgundy. No wonder some of the early vineyard sites were established by producers from France who recognized its potential!
Some early pioneers of the area are Russ and Mary Raney. With their "small is beautiful" attitude, they established Evesham Wood in 1986 with an emphasis on quality. This estate winery relies on two basic principles: obtaining optimally ripe low-yield fruit from the best possible sites and using minimal intervention in the winemaking process.
After a search throughout the Willamette Valley, they chose a site for the estate vineyard, “Le Puits Sec” (French for “the dry well," appropriately named since one is located in the vineyard). There they planted eight acres, three of Pinot Noir, two each of Chardonnay and Pinot Gris, and one of Gewurztraminer. Since then, over four acres have gradually been added as well as small plantings of the German variety, Rieslaner and the Austrian variety, Gruener Veltliner.
Russ and Mary are charter members of DRC (Deep Roots Coalition), a group of local growers/producers which advocates the use of natural methods in the vineyard and cellar, especially the harvesting of grapes exclusively from non-irrigated vineyards. Dry farming does actually force the vine’s roots to grow deeper into the soil. It also helps to conserve water and preserve water tables while producing a more terroir-driven wine.
After twenty-plus years, the Raneys began working closely with Erin Nuccio, the owner of Haden Fig. Not only did the founders see an opportunity to retire early, but also someone who would continue the Evesham Wood legacy and make wine using the same philosophies. In August 2010, Erin and his wife, Jordan, became the owners of Evesham Wood Winery & Le Puits Sec Vineyard.
Le Puits Sec
Le Puits Sec vineyard, planted in 1986, is a gently sloping, east-facing vineyard. It lies on a low terrace (300-420 ft. elevation) on the eastern side of the Eola-Amity Hills ridge. This area has proven to have one of Oregon’s best micro-climates for the production of Burgundian and Alsatian grape varieties. The rather shallow volcanic basalt soils allow low yields for wines of great intensity and complexity. In order to realize the goal of emphasizing the uniqueness of terroir, in 2000 Evesham Wood obtained organic certification of Le Puits Sec vineyard. With the enactment of federal regulations governing organic certification in 2002 (the USDA’s National Organic Program), winery processing was certified as well. In addition, the vineyard is certified by Oregon Tilth, Deep Roots Coalition, and Salmon Safe.
The "Le Puits Sec" bottling was limited to 475 cases. Look for notes of earth and flowers with rich, spiced red fruits and plum. A slight stoney minerality and lavender rounds out the balanced and elegant palate.
La Grive Bleue
The northernmost block at Le Puits Sec, called " La Grive Bleue" produces a wine that is quite distinct from the rest of the Pinot Noir grown on-site. One significant difference is that the La Grive Bleue is all Dijon clones as opposed to the Pommard heavy rest of Le Puits Sec. There also seems to be slightly distinct terroir, warranting its own separate bottling.
A mere 125 cases were produced.
Category: New World Pinot Noir