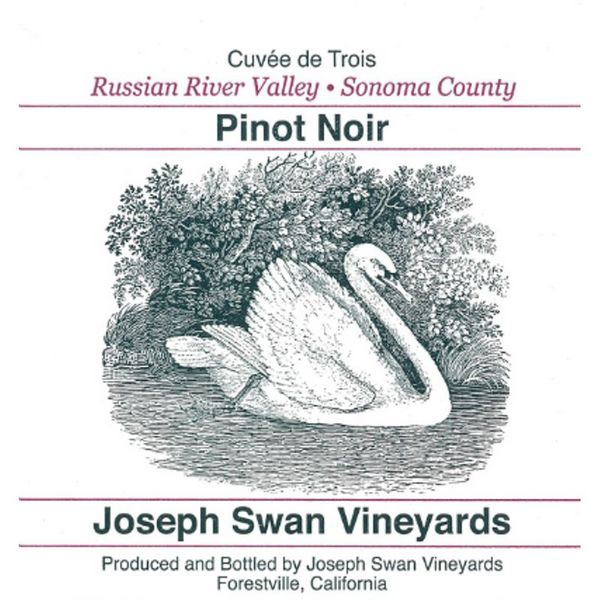 Joseph Swan is one of the pioneering producers in Russian River Valley. Decades ago, this estate helped to set the bar for Russian River Valley Zinfandel and in so doing played a pivotal role in the establishment of the region as a bona fide AVA. However, Pinot Noir also plays a central role in the estate's production, and they are arguably better known today for their impeccably classic Pinot Noirs than anything else. The Cuvée de Trois is a true AVA wine sourced from Swan's estate vineyards and a handful of classic sites in Russian River that are long-time partners of the estate. It's composed of selected barrels that reflect the terroir of they Valley while staying true to the overall character of the vintage.

Sourced from 8 vineyards in the heart of the Russian River Valley, with each block of each vineyard was harvested and fermented separately.  15-20% whole cluster, with native yeast fermentation in open-top fermenters, and punch downs three times a day during peak fermentation, with an average 21 days on the skins.   Aged 10 months in French oak (31.5% new).  Bottled unfined and unfiltered.

The primary goal in bottling this wine is to produce a pinot noir that speaks of the terroir of the Russian River Valley as a whole and best reflects the character of the vintage. Very intense red, dark cherry, and raspberry on the nose. Dark plum on the palate, smooth tannins, long finish. Serious wine! It is long, rich, and well-balanced. Like all of the Cuvée de Trois blends, the emphasis is on creating a wine that drank well upon release but one that is surely capable of rewarding some cellaring.

Joe really believed that, when it came to grape growing and winemaking, small was beautiful. A small vineyard could be tended by one person. Small crops led to more intense, ageworthy wines. A small winery allowed you to oversee every aspect from fermentation to bottling. Joe was a perfectionist and felt that if the wine was to carry his name, then he should be personally responsible for every aspect of its production.

In 1967 he purchased a small farm on Laguna Road near the town of Forestville in the Russian River Valley of Sonoma County and Joe Swan Vineyards was established.  Joseph Swan strives to make interesting wines that reflect their unique origins and to price them fairly.

Joseph Swan Vineyards' long-time owner and winemaker, Rod Berglund, has been bottling this wine since the 1999 vintage. Initially, it was not expected to be but a tiny part of the winery’s total production, but by 2006, Cuvée de Trois had become 20% of production.

The reasons were simple: it was a well-crafted, delicious wine with early approachability, and it was priced right. The wine is a blend, but Berglund notes, “We put every bit as much care and effort into making this wine as we do with our other Pinot Noirs. In fact, it includes all of our vineyard-designated Pinot Noirs, including our Trenton Estate.”

Each year in August, Berglund tastes through all the Pinot Noir barrels on a five point scale and kicks out the lesser barrels. He then puts together trial blends of each of the vineyard lots. Once he has arrived at the proposed vineyard lot, he then makes a trial blend of what is left.

Berglund says, “Usually I need to do some horse-trading with the potential vineyard-designate lots to make the Cuvée de Trois work. The goal is a wine that represents the terroir of the Russian River Valley as a whole.  Year in and year out, I have found this to be a wine you can rely on to be fresh, vibrant, and harmonious, and one you can afford to drink on a regular basis. This is a dependable Russian River Valley offering that you can stock your cellar with as it will age for 5-7 years as well.