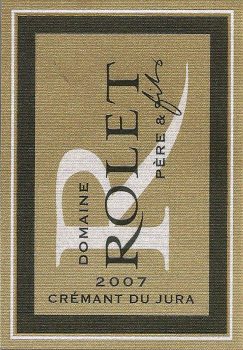 It was Désiré Rolet who in 1942 began making wine in the small region of the Jura in eastern France. In 1958, his four children all decided to stay in the family business and took over from their father. Since that time the domain has risen in prominence in the region and acquired prime old vine vineyards in the appellations of Arbois and Côtes du Jura.

From the beginning, quality farming has been the focus; today the domain is undergoing a complete conversion to organic farming, which in their steep-sloped vineyards can be quite difficult indeed. No herbicides or pesticides are ever used and the soils are constantly plowed – creating beautiful, healthy vineyards.

The commitment to quality viticulture extends into the cellar where they produce balanced, mineral-driven wines that can only come from the Jura. The wines always exhibit a focused purity and intensity of flavor which maintain the cool climate typicity of this mountainous region.

The crémant bottling is a blend of 20 plus-year-old 57% Chardonnay, 16% Savagnin, 16% Poulsard,  and 11% Pinot Noir, from vines planted 1000- 1200 feet above sea level on gray marl with only a few feet of topsoil before hitting the mother rock.

Fermented with indigenous yeast.  Fermented and aged in tank Aged 24 months on the lees before bottling and secondary méthode Champenoise secondary fermentation.

The rosé bottling is produced in much the same way, but the grape composition is different:  45% Trousseau, 29% Poulsard, 26% Savagnin, with the red juice being pressed after some skin contact (saignée).