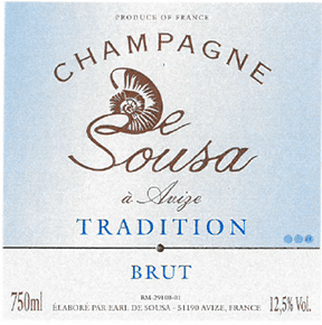 50% Chardonnay, 40% Pinot Noir, 10% Pinot Meunier. A blend of several vintages, fermented in enamel-lined tanks and with full malolactic fermentation. Its elegant and floral nose is also very expressive and intense, revealing a certain finesse. There's a touch of mimosa, followed by citrus and ripened fruit. On the palate, the champagne's bright freshness is complemented by notes of warm honey.  Made from grapes harvested from 45-year-old vines.

"Erick De Sousa is one of the most brilliant viticulturists in the Côte des Blancs today and furthermore, one of the most pro-active."— Bettane et Dessauve, Le Grand Guide des Vins de France 2008

"The excellence of a terroir, the devotion of one family, and an unprecedented leap in quality make these champagnes shine. A rigorous approach where every detail is cared for gives that extra dimension of purity and finesse. I am very impressed by how the family De Sousa manages to keep to their ideas and let this single-minded strive for quality come through very clearly in all of their range." — Andreas Larsson, Meilleur Sommelier du Monde 2007

The history of De Sousa Champagne begins several generations ago when Manuel De Sousa, a soldier from Braga, Portugal, came to France to fight with the Allied army during World War I. He went back to Portugal after the war was over. Economic times were so tough, however, that he decided to return to France with his wife and newborn son, eventually settling in Avize.   As fate would have it, he passed away at age 29 from a sudden brain tumor.  Manuel's son Antoine later married Zoémie Bonville, the daughter of grape growers in Avize. So was born the De Sousa & Fils estate which, since 1986, has been managed by Antoine's son, Erick de Sousa.

In the cellars, riddling is still done by hand, along with an extra shaking of the bottle on its lees deposit, which provides even greater concentration. Production stands at 70,000 to 75,000 bottles per year.

Erick De Sousa farms 25 acres of vines spread over 42 plots. Most are in the vicinity of Avize (there are old vine parcels in Avize, Le Mesnil-sur-Oger, Cramant, Oger and Chouilly) but also in the Montagne de Reims (Äy and Ambonnay mainly) and small holdings in the Vallée de la Marne (Mardeuil) and the Côte de Bar (Essoyes).

Three quarters of the De Sousa vines are over 45 years of age, with some being up to 80 years old. Conversion to organic methods began in 1989, just three years after Erick took over from his father. Yields from these old vineyards are incredibly low.  In 1999, de Sousa began farming his land biodynamically, lowering yields even further.

The vineyards are plowed with a horse to help prevent the soils from becoming compact and to promote healthy insect life underground. Because of this labor intensive work with the soils, the roots often go down over 30 feet. These deep roots extract salts and trace minerals like potassium and magnesium from the chalk, which gives additional minerality to the Champagne.

Erick also likes to harvest as late as possible. He feels this helps make his Champagnes richer, purer and longer lived. The grapes are harvested by hand.

All of De Sousa's Champagnes are fermented using indigenous yeasts. They go through full malolactic fermentation. Many of the wines are fermented and aged in enamel-lined steel tanks. Since 1995, however, he has fermented the wines from his oldest vines in 225-liter oak barrels.