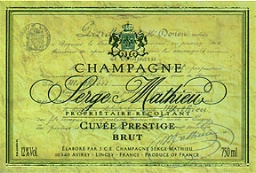 The Mathieu family has lived in Avirey-Lingey since at least the 18th century. In 1760, then again in 1860 and 1894, notarized deeds show that plots within the commune of Avirey-Lingey were acquired by the Mathieu family.  Several others were to follow during the next century, despite troubled economic times. Plot by plot, they have built up a vineyard that now covers about 28 acres. Seven generations of vine-growers have managed the property, at first selling their grapes to négociant houses.

Serge Mathieu began working on the estate with his father in 1959. As sales of Champagne grew, he produced his first bottles in 1970. From an initial level of 5,000 bottles per year, production rapidly increased to 40,000 bottles, just about all of which were sold in France.

In 1987, Serge's daughter Isabelle joined the family firm after studying modern languages at university. She soon set out on the road to France, Germany, and then Great Britain, making contacts and rapidly extending their clientele. Within the space of a dozen years, sales grew to over 80,000 bottles, of which 60% were exported — a very large percentage for a small grower.

In 1996, Isabelle married Michel Jacob, a vine-grower from the nearby village of Merrey-sur-Arce. He joined the Mathieu family business a couple of years later and decided to focus on the vineyards and their care.  In the cellars, Serge tutored the young recruit and gradually handed over the reins.

Isabelle and Michel energetically handle the four main jobs of an independent wine-producer (vineyard cultivation, winemaking, selling and administration). They travel to markets and receive visitors, openly discussing their wines and approach with customers from all over the world.  Nowadays over 100,000 bottles are sold each year, of which 85% are exported to 32 different countries. This small RM (récoltant manipulant), who is widely considered to be the top in the Aube, even ships its Champagnes to Nepal!

The vineyards of Serge Mathieu are 80% Pinot Noir and 20% Chardonnay. The vines have an average age of 23 years.  The main vineyard, adjacent to the winery and office, is called La Bressoire. It covers 8 acres in a single block. Its steep slope faces south southeast and is planted exclusively with Pinot Noir.  A second series of fifteen plots lie on the slope called Bagneux, which is planted with both Pinot Noir and Chardonnay. The vines lie at the top of this slope where they are less susceptible to frost. The remaining part of the estate is comprised of four long strips on the hill called Couins.

For the past nine or ten years, the domain has been selling Pinot Noir to Billecart-Salmon; an impressive validation of the high quality of Mathieu's viticulture.

This champagne from Serge Mathieu is a blend of 2/3 Pinot Noir and 1/3 Chardonnay. Golden yellow color, fine and elegant. In the nose exotic fruits like pineapple and apricot with notes of apple and nuts. The palate is concentrated with a nice freshness and persistence. It has a fine mousse and a balanced taste.   The body is medium along with great, mouthwatering acidity.