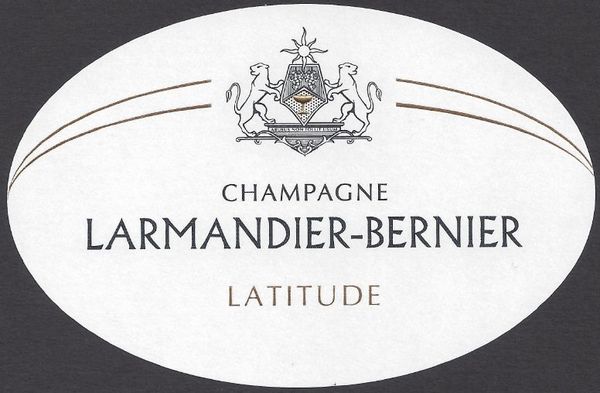 This month, we offer a benchmark Extra Brut non-vintage Champagne from Larmandier-Bernier.

The small house today is directed by Pierre and Sophie Larmandier, who took over the direction of the family estate in 1988. They own just under 38 acres in some of the finest villages on the Côte des Blancs: Cramant, Chouilly, Oger and Avize (all Grand Crus), as well as in the fine premier cru village of Vertus.

In 1992, Pierre began to convert the vineyards over to organic and then to full-blown biodynamic viticulture in 1999.  Ever the purists, Larmandier-Bernier utilize only indigenous yeasts, separate vinification for each cru, and little to no dosage for an unadulterated expression of terroir in their wines.

The wines are vinified in a large, old, wood foudres or smaller Burgundian barrels, depending on each cru and each vintage with an extraordinary long aging time on the lies. Reserve wines are kept in stainless steel tanks or enamel-lined tanks up to 10 years. Blending is generally done in July following harvest, and it is at this time that the Larmandiers decide whether or not their single-vineyard bottlings will be produced.

The Côte des Blancs lies south of Epernay and is the source for many top cuvée & vintage Champagnes for houses of all sizes. The vineyards are mostly situated on east-facing slopes and 95% of the vines are the Chardonnay varietal (hence, the Côte des Blancs name). The soils in the area are typically a thin layer of top soil, beneath which lies the chalk that gives these wines their unique expression of minerality and terroir. Wines from this region are generally praised for their delicacy, freshness, and elegance.

Most of the vineyards are planted to Chardonnay, with about 15% Pinot Noir. The average age of the vines is 33 years, with the oldest vines (50-70 years) found in Cramant.

In the cellar, Pierre is every bit the purist and uses only indigenous yeasts for alcoholic fermentation, producing the most natural and terroir-specific wine possible. Each cru is vinified separately, using a variety of stainless steel tanks; large, old, wood foudres; enamel-lined tanks; or smaller Burgundian barrels, depending on each cru and each vintage.

Many of the wines also undergo malolactic fermentation. Occasionally battonage is practiced as well, but Pierre Larmandier is quick to point out that it is really the vintage that will decide how certain crus will be raised in the cellar. Blending is generally done in the spring following harvest, and it is at this time that the Larmandiers decide whether or not their two single-vineyard bottlings (Terre de Vertus and Vieilles Vignes de Cramant) will be produced. The final blends are made and the wines bottled in May, and undergo secondary fermentation in the deep, cold cellars of Larmandier-Bernier.    latitude is a cuvee made from more clayrich sites in Vertus that are riper, fleshier and broader on the palate, delivering a wine of great charm and appeal.
93 Vinous : The NV Extra Brut Blanc de Blancs Latitude 1er cru is a powerful, driving wine that exemplifies the house style at Larmandier-Bernier. There is real texture and breadth here.
Citrus, dried almond, chamomile and crushed flowers build in a beautifully resonant, expressive Champange
that shows rthe natural richness that is common in the southern part of Vertus

The wines are aged for several years prior to hand-riddling and disgorgement and are then held a minimum of six months before being released into the market.

An important belief of Pierre Larmandier's is that the underlying terroir is expressed best with very minimal levels of dosage, or - in the case of Terre de Vertus—no dosage at all. Consequently, all of the Larmandier-Bernier wines never receive more than five grams per liter of sugar (versus other Brut bottlings that can go as high as twelve grams per liter).

This puts Larmandier-Bernier's Brut champagnes in the category of Extra Bruts. In a world of Champagne that has witnessed sweetness levels rise in the last couple of decades, the Larmandier-Bernier wines stand out for their textural purity and their underlying energy derived from their minerality. They emerge from the cellar with picture-perfect balance, drinking well right out of the gate, while possessing all of the inherent precision to age gracefully for decades

Latitude is a cuvée made from more clay-rich sites in Vertus that are riper, fleshier and broader on the palate, delivering a wine of great charm and appeal.

Previously, this cuvée was called "Tradition", a name that was chosen in the 1970’s by Pierre’s parents. The new name Latitude was selected since the wine is composed exclusively of Chardonnays originating from the same latitude: the south of Vertus, where Pinot noir was historically planted.

This is a generous terroir resulting in a round, rich, charming style, which still retains the characteristic pureness of the estate’s Champagnes. Pierre believes the wine possesses "pinot-like" characteristics such as red fruit flavors and breadth on the palate -- despite it being 100% Chardonnay -- which he attributes to this unique terroir.

94 points, Decanter:   Chalky minerality, lemon peel and spring blossom on the palate and the smell of freshly-baked bread. Tiny bubbles. I'd expect most students to get this as a Blanc de Blancs from Champagne. Bonus points for anyone who spots the Extra Brut dosage.
93 points, James Suckling:  This Blanc de Blancs champagne is anything but flashy and it might take a moment switch onto its wavelength. However, it has excellent depth and finely etched contours on the medium-bodied palate, the Amalfi-lemon character building as it aerates in the glass. Beautiful balance at the very long, rather rich but very dry finish. From biodynamically grown grapes. Drink or hold.

93 Vinous : The NV Extra Brut Blanc de Blancs Latitude 1er cru is a powerful, driving wine that exemplifies the house style at Larmandier-Bernier. There is real texture and breadth here.
Citrus, dried almond, chamomile and crushed flowers build in a beautifully resonant, expressive Champange
that shows rthe natural richness that is common in the southern part of Vertus.