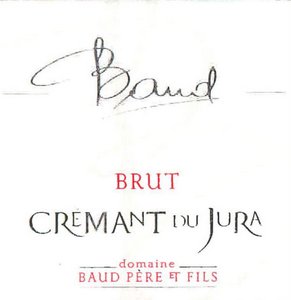 100% Pinot Noir from the cool Alpine region of Jura in France.   Both fermentations (alcoholic and malolactic) happen within stainless steel tanks. After bottling, the second fermentation takes place giving it its effervescence. The Crémant is then aged for a minimum of 12 months followed by disgorgement. At this stage, the dosage is added to obtain a Brut style.

Pale pink in color. A perfect balance of lively red fruits and biscuit. Round yet crisp. Bubbles for any and every occasion wine.

The history of this estate dates back to 1742, when Jean-François Baud started working as a pieceworker in Le Vernois. The family house accommodated all the following generations that were already listed in the town archives before the 1789 French revolution, earning their livings from mixed farming.

In 1950, René Baud, the 7th generation, rebuilt the vineyard which had suffered from the phylloxera crisis as well as from the two World Wars. At that time, 10 acres of vines were cultivated. In 1978, the 8th generation started running the winery (Jean-Michel Baud and Alain Baud), and gave the company a fresh boost by creating the official estate “GAEC Baud Père et Fils”.

Thanks to their tireless hardworking, the vineyard was progressively extended from ten to 50 acres of vines. Jean-Michel was in charge of the vineyard, while his brother Alain was responsible for wine-making and trade. January 1st, 2016 is a significant turning point as the 9th Generation took over the reins of the estate: Bastien, 23 years old, is in charge of the vineyard and the wine-making process, while Clémentine, 25 years old, is taking care of trade and management.

Since their succession, the estate has grown to over 60 acres.