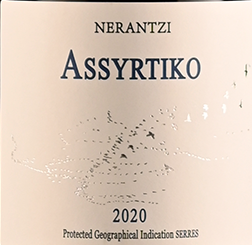 Domaine Nerantzi is a new and exciting organic producer near the border of Macedonia and Thrace in northern Greece. Nerantzi Mitropoulos is an earnest, imposing, and gregarious personality who made it his life’s mission to uncover indigenous varieties lost to the world at large and bring them back to the fore. He believes in a kind of locavore approach to winemaking, whether it be the use of long‐lost indigenous varieties, spontaneous yeast fermentation propagated via the native yeasts from their vineyards, or even the use of local, Balkan oak for their cooperage. Their main desire is to have their wines express what is unique to their region and share it with the world.

The Mitropoulos family is steeped in agriculture—consequently, when Nerantzi began his serious education in wine, his main interest lay in the cultivation of the vines and the plants themselves.    Due to his love of history, country, and region, Nerantzi continually visited places searching for what he calls “the little things” left from the older Greek tradition.

Today, with the help of his daughter Evanthia who recently graduated with an enology degree from the University of Dijon in Burgundy, Domaine Nerantzi makes several wines from their 37 acre domain.  The soils of the domain, which lie at an elevation of 1000 feet above sea level in the foothills of Mount Menoikio, are of moderately calcareous sandy loam. But the real marvel is what is hidden within the soil: layer upon layer of ancient pottery is strewn on the hilltop where the vineyards are planted. One could say that part of the terroir of this domain is the patrimonial history of Greece itself, as millennia of overlapping culture and history comprise what the vines dip their roots in and draw nutrients from.

The Mitropoulou family planted assyrtiko in a valley in Central Macedonia more than a decade ago and winemaker Evanthia Mitropoulou finds that it thrives in the rich loam soils; she credits the limestone that lies underneath for giving the wine its mineral flavors. Farmed organically, the vines produced a small, concentrated crop in 2019, which she vinified in stainless steel, with minimal sulfur. The result is zesty and invigorating, with bright acidity and a salinity that keeps the pear flavors compellingly juicy. Those flavors broaden with time in the glass, developing a subtle richness that makes this very easy to drink

Farmed organically, the vines produced a small, concentrated crop, which are then vinified in stainless steel with minimal sulfur. The result is zesty and invigorating, with bright acidity and a salinity that keeps the pear flavors compellingly juicy. Those flavors broaden with time in the glass, developing a subtle richness that makes this very easy to drink.

This white wine has a bright yellow color. On the nose, it is floral with some fruity notes as peach and some sweet citrus aromas. In the mouth, it is very balanced, lemon peel and notes of red apple are inflected with a trace of salinity and savories. The minerality is also contributing to the freshness and the fine grape tannins make it soft and smooth, with a long finish. This wine pairs wonderfully with fresh oysters, grilled squid, and other fresh fish on the grill.

Prior vintage reviews:  94 points Wine & Spirits  This is exhilarating wine: It starts out smelling heady and ripe, then does a one-eighty, delivering pure, stony flavor. All the fruit - the notes of pear, marzipan and citrus oil - feels as though it’s there simply to flesh out the wine’s intense structure. The main event is stones and surging acidity - it’s salty and firm, and keeps giving freshness. Evanthia Mitropoulou farms her vines organically and vinifies this wine without any inputs."