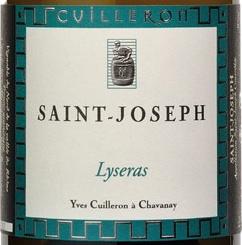 Cuilleron Saint Joseph Lyseras is a blend of plots facing South /South-East on the slopes of the communes of Chavanay and Saint-Pierre-de-Boeuf (North of the appellation). The soil is sandy and granite with natural grass over to fight against erosion. No insecticides are used and treatments are limited (depending on weather and necessity). Little fertilizer is used and only organic. Precise control of vigor and yields is maintained through leaf thinning and green harvesting for better grape ripening.  Disbudding is in spring. The grapes are hand-picked.

Indigenous yeast primary fermentation, followed by full malo conversion.  Aging takes eight months with 50% in wooden casks of 30 hectoliters and 50% in Burgundy barrels without racking. The plots are then blended before bottling.   A blend of Marsanne and Roussanne.

Crisp orchard fruit, citrus, and some butter citrus/lime qualities all flow from this medium-bodied, racy and pure white. Showing excellent purity and high drinkability, it will be versatile on the dinner table and drink nicely for three to four years.