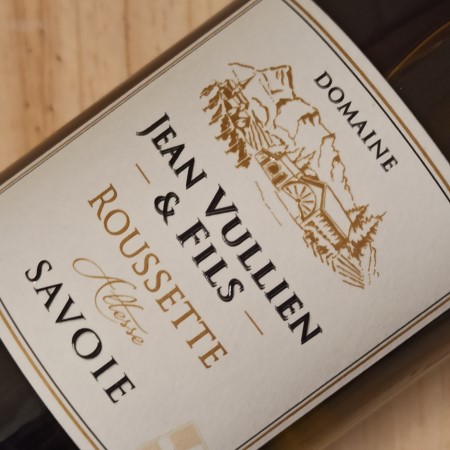 The eastern French region of the Savoie is one of the most exciting wine regions on the planet, and it's near the top of my must-see places to go once we can get on airplanes and visit other countries again.

Savoie is blessed - a cool mountain climate on a warming planet, and about as idyllic a place to grow and make wine as one could ask for. Known more for skiing and other outdoor pursuits, the Savoie is not so well known as a wine-producing area, though within the area known as the Combe de Savoie, there are a handful of great producers.

With little-known grape varieties such as Jacquère, Mondeuse, and Altesse nestling alongside Pinot Noir, Roussanne, Chardonnay, and Gamay, the world of Savoie wines begs to be explored. I was astonished at the quality of Jean Vullien’s wines, especially when compared to most other producers in the area.

How were they producing such high-quality, clean, and fresh wines when so many others clearly couldn’t? It transpired that Jean Vullien learned viticulture in his native Bordeaux and his two sons, David and Olivier graduated at the renowned wine college, La Viti in Beaune.

The region’s best comes from a boomerang-shaped string of hillside villages between Grenoble and Albertville (site of the 1992 Winter Olympics) called the Combe de Savoie (Combe is a word of Celtic origin meaning a sharp, deep valley). Jean Vullien and his two sons, David and Olivier, tend 69 acres on the Combe in the villages of Chignin, Montmélian, Arbin, St-Jean de la Porte, and their hometown of Fréterive.

Eric Asimov, wine writer for the New York Times, recently extolled the virtues of the region: "(The Savoie) produces some excellent red wines, but mostly whites that are as cool, crystalline, and refreshing as a mountain stream.  I’ve consumed quite a few Savoie whites over the last few weeks, and the best of them, without fail, made me feel as if I were in breezy meadows among the foothills, under the distant glowering crags of the Alps themselves. This transportive quality is a powerful feature of Savoie whites."

The domain's holdings include all of the region’s indigenous grape varieties, as well as strategically-placed parcels of Chardonnay and Pinot Noir. The wines range from a crisp, lemon and mineral Jacquère-based white that British wine author Andrew Jefford would categorize as “Muscadet of the Alps” to complex floral and spiced reds made from Mondeuse. In recent years, David and Olivier have also earned a reputation for their excellent Méthode Traditionelle sparkling wines.  Though the Vulliens have been making wine for 40 years, the family is perhaps best known as a leader in another segment of the wine industry.

Chignin-Bergeron Vines of Chignin-Bergeron are located in the heart of the Combe de Savoie between Chambery and Albertville, sheltered from the winds of the North on the slopes of Montmelian and Francin. The vineyard is composed of young and old vines. Slopes sloping from 30% to 50%, south plain sunny. Manual harvest. Lower yields.  100% Roussanne. Strict selection in both vineyards and on the sorting table before crush. Direct pneumatic pressing. Alcoholic fermentation at low temperature in stainless steel vats thermo-regulated about three weeks.  It’s fascinating, lip-smackingly good, and, considering its remote place of origin, very well-priced. It’s simply one of the best whites from the Savoie.

Roussette de Savoie Sheltered from the winds of the North on the slopes of Freterive and St Jean de la Porte, in the heart of the Combe de Savoie. The vineyard is composed of young and old vines. Sloping slopes, full sun south. Manual harvest. 100% Altesse.  Total destemming. All fermentation and majority of élevage takes place in temperature-controlled stainless steel tanks. Malo-lactic fermentation carried out.  Parker on an older vintage:  A pungent nose of orange zest, buckwheat, nutmeg, and toasted hazelnuts leads to a subtly oily yet juicy and refreshing palate. Bright notes of lemon, citrus zest, chalk, and salt add invigoration to the lightly-toasted nut and grain and moderately ripe pit fruit flavors in the finish. Over the next couple of years, this will take on a lightly oxidized, flor-like patina, typical for the Altesse (a.k.a. Roussette) grape, but remain interesting and versatile.