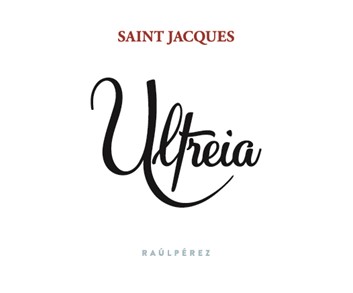 Raúl Pérez Pereira is universally considered to be one of the world’s most visionary winemakers. Since he produced his first vintage for his family’s winery in 1994 at age 22, he has been at the forefront of the conversation about what has been called “The New Spain”.

In 2005, he left his family business to strike out on his own, creating Bodegas y Viñedos Raúl Pérez, which quickly became the point of reference for the Bierzo appellation. In the intervening years, he has expanded his sphere of activity to include the appellations of Rías Baixas, Ribeira Sacra, and Tierra de León, but his heart and his home remain in Valtuille de Abajo, the village in Bierzo where his family has been tending vines for well over 300 years.

The vineyard is located just west of the town of Valtuille de Abajo in the Bierzo DO region. Rather than the robust, earthy side of Mencía, this limited-production cuvée is more about the youthful, fresh, and vivid flavors of the grape.

The word ‘Ultreia’ pays tribute to the many pilgrims that have passed by this site since the 3rd Century, en route to Santiago de Compostela and the crypt of James the Apostle. ‘Ultreia’ comes from the Medieval Latin used by travelers to encourage each other, as they pressed onward toward their destination. The word means "Onward!" and ‘St. Jacques’ is French for St. James.

For centuries, there’s been a heavy French influence in this part of Spain because the pilgrimage originates in four French cities: Paris, Vézelay, Le Puy, and Arles. Many French families from all trades, including vignerons from Burgundy, the Rhone, and Bordeaux, have passed these glorious vineyards to pay homage to James the Apostle.   Raúl Pérez is one of Spain’s finest winemakers and some wine trade veterans believe Raul is among a handful of the best winemakers in the world (me among them). Raúl believes great wines are made in the vineyard and he has an uncanny knack for knowing what his vineyards need to achieve their greatest potential.

As his great talent has become known, many winemakers now seek to collaborate with Raúl.  Made from an eight acre single vineyard that was planted in 1889, this wine is a brilliant effort that shows the youthful, fresh and mineral sides of the Mencía grape. Of all the wines made by Raul, this is one of his best values. 100% Mencía. Organically grown vines planted in 1889. Tended in sandy soil with small river stones at 1,762 ft. elevation

Pérez’s legend has been growing in the US for several years now; he originally gained international recognition working with his mentor, Alvaro Palacios, on assorted projects throughout northwest Spain (and beyond), but his home base is Bierzo, which is situated right where the Galicia region gives way to Castilla y Léon. From 1993-2004 he was the winemaker at Castro Ventosa, his family’s historic Bierzo winery, after which he founded his eponymous operation in the same village—Valtuille de Abajo. His family owns about 50 acres of vineyards in and around Valtuille, which are broken up into incredibly tiny parcels farmed by many individual growers.

Pérez’s “Ultreia” series follows a Burgundy model: There are a few “village-level” wines at the entry level—of which this “St. Jacques” is one—and then several more limited-production, single-vineyard bottlings.  As with the Galician wine zones, Bierzo experiences a cool, wet Atlantic Ocean influence, but as you move eastward, to lower altitudes closer to the Sil River, the influence of the warmer, drier plains to the east can be felt. At higher elevations the Bierzo soils are a mix of slate and granite, transitioning to more “alluvial” material—sand, silt, and clay—in the lower-lying areas.  Valtuille is indeed part of the latter “Bierzo Bajo,” although, at elevation, there’s nothing especially bajo about it.

Ultreia St. Jacques is sourced from extremely old vines (some going back to 1900), scattered across a variety of small parcels around Valtuille. In addition to Mencía, which comprises the majority of the blend, there are small amounts of Alicante Bouschet and Bastardo (a.k.a. Trousseau) incorporated into St. Jacques; the wine is about 80% “whole-cluster” fermented (meaning intact grape bunches are crushed and fermented, stems and all) in large oak vats. It is then aged in a mixture of used oak barrels and concrete tanks, and bottled unfined and unfiltered.

Ultreia-St. Jacques is tremendously elegant wine for the money! In the glass, it’s a deep ruby moving to purple/magenta at the rim, with a beguiling nose of pomegranate, plum, red and black raspberry, wet roses and violets, graphite, a hint of eucalyptus, and crushed stones. It is medium-bodied and silky on the palate, the tannins barely perceptible and the acid bright but not sharp. The energetic palate impression is where the Burgundy comparison comes into play—it is easy to drink, but persistent on the finish. And it’s an absolute pleasure to drink now: Decant it about 30 minutes before serving at 60-65 in Burgundy glasses, if you have them. It will easily do double duty on the dinner table with fish and meat, though I’m inclined toward the latter. Don’t hesitate to chill the Bierzo more if you like it cooler.