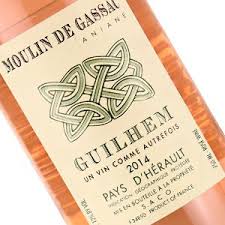 Year in, year out, this is our best-selling rosé - and it's easy to see why: bright fruit and balanced flavors, low alcohol, and organic and biodynamic viticulture!

Always one of the first rosés to hit the market, this traditional southern Rhone blend comes from 25-50-year-old vines grown along the Gassac River. It boasts a pleasant, intense nose with hints of strawberries. Full and round on the palate with red fruit flavors.

A blend of Carignan and Syrah from Jurassic limestone slopes in France's deep south. The crop (which is ultra-organic) is de-stemmed to avoid harsh compounds leaching into the wine. The young wine was rested for 6 months in stainless steel prior to bottling, to allow its flavors to come together.

The producer, Mas de Daumas Gassac, has been variously described as 'Lafite in the Languedoc', 'the only Grand Cru of the Midi' and 'exceptional'.

Several years back, the folks at Mas de Daumas Gassac began working with a neighboring cooperative in Sête to produce fun, full-flavored wines from the surrounding countryside and rocky hillsides. The goal is to produce wines grown under the strict vineyard and winemaking regimens employed at this unique domain.

Organic farming is de rigueur and the vinification is closely overseen by the Guibert family. The results are splendidly aromatic wines that bring out the terroir of this Mediterranean region. The wines are named after St. Guilhem, the patron saint of the area where the village of St. Guilhem le Désert, one of the most stunningly beautiful villages in Europe, draws people from all over the world.