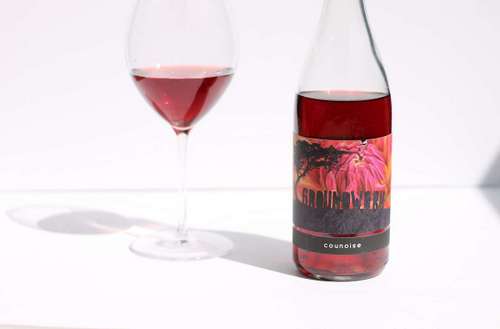 From the SF Chronicle:   Groundwork’s Counoise is a thoroughly modern-tasting wine, expressing many of the features that have come into vogue in certain circles lately. It’s a limpid, gauzy red wine, the sort of color that almost bleeds into rosé territory. It’s made using carbonic maceration, a process that imbues a wine with those super-fruity flavors that can sometimes recall berry-flavored bubble gum. It straddles a pleasing line between clean and funky, with sweet, earthy aromas that remind me of fresh potting soil.

So it surprised me, when I spoke to Groundwork winemaker Curt Schalchlin, that he began making this Counoise in exactly this style back in 2011, several years before wines of this sort had found the loyal audience they have today. “It was a tough sell to our following,” says Schalchlin, a Paso Robles winemaker who also runs the Sans Liege label. “Our customers were like, ‘What is this?’” A decade later, the Counoise is one of his most popular wines, he says.

Counoise (COON-wahz) is a grape variety most closely associated with the Rhone Valley in southern France. It’s usually a minor component of a multi-grape blend, adding a little pop of acidity to a wine that’s mostly made of Grenache, Syrah or Mourvedre. Rarely does it get the varietal-wine treatment, but there are a handful of American bottlings that showcase Counoise from producers like Tablas Creek and Newfound.

Schalchlin gets his Counoise grapes from a vineyard in the Arroyo Grande Valley, in San Luis Obispo County, and he says the grapes themselves are massive, forming huge clusters as they ripen throughout the season. Larger berries tend to produce a lighter-bodied, less tannic wine: Most of a wine’s color and tannins come from the grape skins, and the larger a grape is, the lower its skin-to-juice ratio. The first year Schalchlin worked with the vineyard, he watched in awe as the Counoise grapes just grew and grew and grew. “It got to a place where I realized I wasn’t going to make a serious wine without manipulation,” he says.

By “serious,” he means a wine that has all the traditional markers of ageability: grippy tannins, deep color, heavy weight. Instead of pursuing a wine style like that, he figured, “maybe we’ll just honor what the grapes want to do on their own.” That’s what led Schalchlin to perform carbonic maceration, a process that tends to complement lighter-bodied, lower-tannin styles and emphasize a wine’s fruitiness and tanginess. Ten years later, he pretty much hasn’t changed the winemaking regimen for the Counoise.

And why would he? It’s a delightful wine, as electric in appearance as it is in taste. A persistent tart-cranberry flavor mixes with a hint of something sanguine and gamy. Don’t expect it to taste like a rosé; there is some tannin here, providing a welcome textural frame to the wine. Schalchlin recommends that people drink it chilled, and I agree, though it holds up well at room temperature too. Try throwing it in the fridge for just 20 minutes or so before you plan to pop the cork.