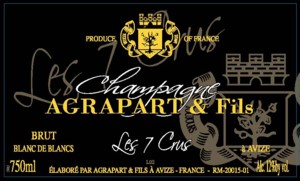 The Champagne house of Agrapart et Fils is located in the celebrated village of Avize in the heart of the Côte de Blancs. The estate was established in 1894, yet unlike many of the smaller grower Champagne houses that have only begun to estate bottle under their own labels in recent decades, the Agrapart family has done so since the inception of the Domaine. The winery was founded by Arthur Agrapart, and is now run by the fourth generation of the family.

Pascal Agrapart, who shares ownership with his brother Fabrice, is the quiet force behind this esteemed property. Pascal looks a bit like the actor Russel Crowe, yet his demeanor couldn't be more different than that of a celebrity. He is humble and soft-spoken, with the talents and wisdom of an experienced, impassioned vigneron. While certainly a "man of the earth" who enjoys spending time in the vineyards, Pascal is equally versed in the technical details of the cellar, allowing him to explore and master his craft. He maintains the same commitment to excellence that has earned this fine Domaine its loyal customer base in France and beyond.

While Agrapart wines have long had somewhat of an underground following, in recent years, Pascal has gained an international reputation. He has had to learn to maneuver in the limelight, quietly and humbly, of course. Today, he is looked up to and revered by some of the region's rising stars as sort of a professor emeritus of the region, who blazed the trail of quality and helped to set the stage for Champagne's cutting edge revolution.

Amboise Agrapart, Pascal's oldest son, recently joined his father at the Domaine. Together they manage nine and a half hectares of predominantly Chardonnay vineyards, the vast majority of which are Grand Cru, in the heart of the Côte de Blancs (primarily in the villages of Avize, Oger, Cramant, and Oiry). To ensure the highest possible quality, production has always been kept at an artisanal level, with quantities of no more than 5,400 cases produced in any given year. Vine age is among the oldest in the Côte de Blancs, with many of the Agrapart’s vineyards in excess of seventy years of age, and the average overall age of the vines is a healthy forty years old. The estate has also farmed organically for years but has never really publicized it. For Pascal, this is merely the right way to farm, not a marketing fad to promote his wines. From these fine, old Chardonnay vineyards, Pascal produces some of the most refined and complex wines to be found in the region.

Galloni, Vinous: The NV Brut 7 Crus is an attractive, easygoing wine that will drink well upon release. A touch of Pinot softens the edges nicely, giving this Chardonnay-based Champagne tons of accessibility. Lemon confit, chamomile, mint, and white pepper all open in the glass, but it is the wine's textural feel that makes the 7 Crus so rewarding to taste and drink today. This release is equal parts 2017 and 2016, from parcels in Avize, Oger, Oiry, Cramant, Avenay Val d’Or, Bergères les Vertus and Mardeuil. About 25% of the wine was done in neutral oak, the rest in cask. Dosage is 7 grams per liter. Disgorged: April, 2020.