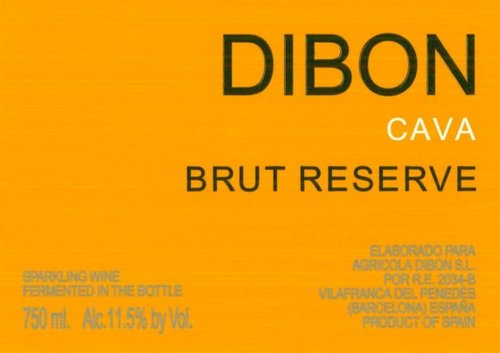 Dibon Cava Brut, an organic méthode Champenoise wine Sparkling wine from Spain that is so delicious and so inexpensive that there's always a bottle in my fridge!

Bon Appetit called the wine "a true bargain, with subtly sweet apricot flavors balanced by tart grapefruit.," while Slate.com described Dibon as  "brimming with grapefruit and almond notes, a crowd-pleaser."  It's light, refreshing, and inviting,  very food-friendly, and inexpensive enough to buy by the caseload!   The Wall Street Journal named Dibon its #1 Cava!

There is a reason that this is the fastest-growing Cava brand in the country – It consistently over-delivers with layers of complexity, enviable weight, and finely textured bubbles.  Composed of the three main grapes used in Cava:  Macabeo, Parellada, Xarel·lo to produce a crowd-pleasing sparkling wine that's perfect in a glass by itself, or as the sparkling wine component to a spritz.

The three grape varieties are sorted and fermented separately. The fermentation process is controlled at low temperatures in order to achieve the maximum expression of fruit. The second fermentation takes place in the bottle over two years.

Brilliant appearance with the constant release of fine bubbles forming a crown on the surface of the glass. Pale straw yellow in color. Aromas of fresh baking arise from the second fermentation in the bottle, giving it a character of its own. Smooth and silky, its carbonic release gives it freshness and vivacity, resulting in a long finish.

In the late 1800s, Miquel Tetas would travel all night to Barcelona with two 500 liter barrels strapped to horse and cart, selling his wines to a clientele who revered them for their finesse and freshness.  One year some of Miquel’s young wines spontaneously gave off small quantities of carbon dioxide, everyone loved this effect, and Miquel began to investigate how to ferment his grapes in order to preserve this carbonation.  Reynal, the first sparkling wine ever made in Spain, was the result of what were many trials and experiments.

Success and demand rapidly succeeded Miquel’s expectations. His company soon began to export outside of Spain, and by the mid-1960s his wines were a reference point for sparkling wine in Penedes. To this day wines are fermented and aged in the underground cellar of an 18th-century building that sits next door to the Villafranca del Penedes train station.  All wines are estate grown and based on the local variety of Xarel-lo. Minimal aging is 15 months, and reserve wines are aged up to 10 years. Farming is natural, and this is the first Spanish winery to have been issued a biodynamic certificate from Demeter.