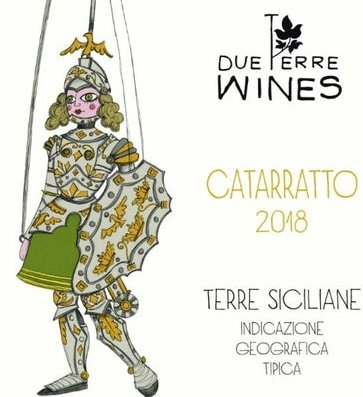 Cataratto is one of the most important indigenous grapes from the island of Sicily and the most widely planted. It is used in nearly every white blend on the island and produces a consistent, drinkable wine. Due Terre uses the less common biotype called Cataratto Bianco Lucido which is known for making higher quality, elegant wines that are more complex, full of juicy acidity, and pleasant minerality. Their north-facing vineyard on Monte Bonifato is over 2200 feet above sea level on pure calcareous rock with a very thin, poor topsoil.

Catarratto is a very expressive grape variety, its aromas are intense, so much so that it is considered a semi-aromatic grape variety. The aromas that distinguish it are remarkable when the wine is well made: tropical fruit, peat and cereals, honey, almonds, candied fruit, flowers, and a light spicy note that cuts all the wine.

100% Cataratto Bianco Lucido harvested in mid-September, gently pressed and cold fermented at 57 degrees Fahrenheit for 15 days, and then simply aged for four months in concrete tanks.

An incredibly versatile white wine that can be enjoyed with a number of dishes. Its classic notes of tropical fruit and green almond lend well to difficult to pair foods like artichoke and asparagus, and it plays very well with all sorts of sea creatures.

Due Terre was founded by Alcamo native Vito Lauria and California wine enthusiast and merchant Catherine Stratton. Vito originally returned to Sicily in 2005 after achieving his Degree in Enology from the University of Udine in 2003 and spending a few years working at wineries in Northern Italy. Upon returning he was determined to revitalize his family’s old winery in Alcamo and spent five years making improvements.

Due Terre is based on important, historic relationships that Vito has with small, family growers working organically on the varied sand and calcareous soils of Mt. Bonifato. All Due Terre wines are from certified organic growers who have been practicing for many, many years and who have genuine engagement with the vines and love for their land. Wines are fermented on native yeast and guided into the bottle with the aim of letting the quality of the fruit speak without the need for manipulation or heavy sulfite doses.