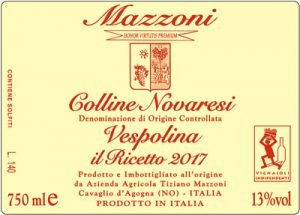 Ghemme is located in the north of Piemonte, about 100 miles from Barolo as the crow flies.   While Nebbiolo is the dominant grape here (where it's called Spanna), other wine grapes are cultivated here, including the wonderfully named Uva Rara (rare grape) and Vespolina - both of which are mainly used as blending grapes, but which can produce very interesting mono-varietal wines.

Up until the second world war, Nebbiolo wines from this region held a very high reputation, even more so than wines from the Langhe. Yet after the war, many farmers moved from the land to work in factories, and vineyards were abandoned.

In 1997, the region was upgraded to DOCG status in part as an attempt to preserve its vineyards but also to acknowledge the region’s historic place in Italy’s winemaking traditions. Today, families like the Mazzonis are pivotal in bringing this 200-acre appellation back into the ranks of Italy’s great wine areas, where it clearly belongs. Still, there are less than two dozen producers making wine in Ghemme.

Regional soils are a mix of volcanic stone and clay, well-draining and full of beneficial minerals. The family from the beginning has farmed the land according to organic principles, avoiding any chemical treatments. Sulfur addition is minimal.

Vespolina is a very special treat from Ghemme — this rare, red grape is native to this corner of northern Piedmont and is found virtually nowhere else. Look for aromas of black and red plums, red cherries, light floral notes, spices. Medium-bodied, fine, light tannins. Good acidic balance  Some compare this wine to part Fleurie (Beaujolais) and a whole lot of red berry fruit and refined tannins. Almost too fun to enjoy! A wine for sharing with friends, says winemaker Tiziano Mazzoni.

100% Vespolina from estate vineyards in Ghemme and Cavaglio d’Agogna. Soils are essentially volcanic, well-draining, and high in mineral content, as well as rich in clay.

The Mazzoni family has a long history in Ghemme, yet winemaking as a profession in recent generations hasn’t always been practical. Tiziano’s father in the early 1960s left behind the life of a farmer to work in a factory, as many other Italians did at the time during the north’s economic boom.

Yet wine remained a vital part of the family’s heritage, a connection that for Tiziano, would later become a call he simply couldn’t ignore.

In many trips down to Barolo via motorbike, Tiziano explored the Langhe and the flavors and textures of Nebbiolo. And with time, he decided to return to his roots and explore Nebbiolo on his home soils.

In 1999, he purchased three acres of vineyard in Ghemme, a small portion of which was planted in the late 1960s—a symbolic bridge, in a sense, connecting his family’s leaving the land to his return to it. Today Tiziano farms a total of 11 acres in Ghemme, with a focus on Nebbiolo and Vespolina.