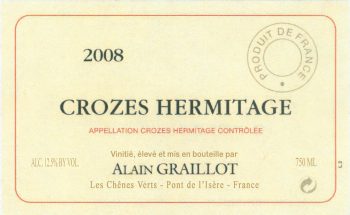 Crozes-Hermitage is an appellation of the northern Rhône valley in France. It covers a relatively large area on the eastern bank of the river, to the north and south of Tain L'Hermitage town. It is much larger than the prestigious Hermitage appellation which it surrounds, both in area and in terms of production volume. Around 7.5 million liters of wine are produced and sold under the Crozes-Hermitage title each year.  This is more than the other seven northern Rhône appellations combined. There are 4500 acres of vines currently in the appellation, with the vast majority (around 90 percent) of being red, and made from Syrah. The remaining 10 percent are white Crozes-Hermitage Blanc wines made from Roussanne and Marsanne.

In France’s Northern Rhone Valley, there are few names as revered as Graillot. It was in 1985 that the now legendary Alain Graillot, who after working with the venerable Jacques Seysses at Domaine Dujac, came back to his home in Crozes-Hermitage to start his own domain. With each passing year his devotion to the art of making hauntingly delicious Syrah from his organically farmed, stone-laden vineyards, has been rewarded with an ever-growing and highly dedicated following around the world. Alain’s sons Maxime and Antoine have been in charge since 2008, with Alain working closely alongside them to this day. All the work is still completely the same as it ever was: hand-harvesting, organic farming, whole-cluster fermentation, and aging the wines primarily in one-to-three-year-old barrels purchased from some of the top estates in Burgundy.

In great years, the Domaine also makes tiny quantities of a barrel selection knows as “La Guiraude,” a rare and remarkably complex wine of particular distinction. The domain's status as one of the top domains in all of France is without question and the whole lineup are must-have for any serious Northern Rhone fan.

This bottling is 100% whole-cluster Syrah, fermented in concrete and aged in older barrels.  93 points from Vinous:  "Inky ruby. Mineral- and spice-accented aromas of ripe dark berries and candied violet show outstanding clarity and lift. At once rich and energetic in the mouth, offering juicy blackberry, bitter cherry, and spice cake flavors that slowly turn sweeter on the back half. Shows outstanding clarity on the long, penetrating finish, which features well-judged tannins and lingering floral and spice notes."