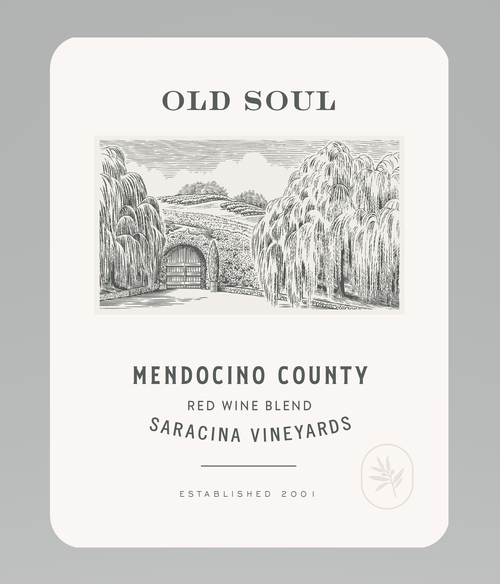 Saracina is a family-owned, California Certified Organic (“CCOF”) winery and vineyards located along the Upper Russian River in northern California’s wine country. The 600-acre farm, located outside the small town of Hopland, is home to 250 acres of organically farmed vineyards, 100-year-old olive orchards, vegetable gardens, and beehives in harmony with all manner of bird and wild animal life.

The handcrafted, limited production Saracina wines reflect a conscious sense of this beautiful place in Mendocino County. Founded by husband and wife team John Fetzer and Patty Rock in 2001, Saracina has always been defined by a strong sense of family. In 2018, Marc Taub took on stewardship of Saracina, upholding the spirit of family ownership that has defined this iconic Mendocino County winery since inception.

Although John Fetzer sold the Fetzer Vineyards brand to a large corporation in 1992, John and his siblings retained a few thousand acres in ranch land and vineyards for the Fetzer family. After dividing up the vineyards among the family members, John focused on replanting his own vineyards and on other land development projects. By 2001, this workaholic, insomniac vigneron, who lives for building projects, realized he still had a lot he wanted to do in the wine industry. He then joined forces with his wife, Patty Rock, to launch the Saracina and Atrea wine brands.

John acquired the coveted Sundial Ranch along the Upper Russian River on Highway 101 in the early 1980s. In the late 1990s, the ranch was renamed Saracina after a centuries-old farmhouse and vineyards in Tuscany where he and his wife, Patty Rock, spent their honeymoon. Visitors driving into Saracina now are captivated by the vast hillside and valley floor vineyards and the charming mix of rustic and modern structures, many of which have been constructed by John and his team using reclaimed materials from the ranch.

The Roussanne was sourced from the sustainably farmed, estate-grown Kyli’s Vineyard. The Viognier was sourced from a neighbor’s Lakeview Vineyard in the Sanel Valley. The harvest was marked by below average rainfall and an even growing season, yielding intensely concentrated fruit, particularly notable in, and favorable to, these Rhone Valley varietals. We picked the Viognier on September 27th, with the Roussanne following just four days later on October 1st.

The grapes were whole-cluster pressed. The settled juice was barrel fermented with 50% in small stainless barrels and 50% in neutral French oak. The wine did not undergo malolactic fermentation and remained sur lie for three months with bi-monthly batonnage.

Medium-deep gold in color, this shows sun-ripened stone fruit and wildly fragrant honeysuckle aromatics. The palate echoes those notes with a clean, refreshing texture and a fleshy exuberance. Enjoy this wine in the warmth of the sun on a lovely late spring or summer afternoon. It pairs beautifully with fresh fruit of the season, ripe soft cheeses, or simple grilled fish or chicken.

Old Soul Red by Saracina is a nod to Mendocino County’s adventurous history of exploration and discovery. The Zinfandel comes from two vineyard sites. The Chapman vineyard is certified organic, with head-pruned vines that sit on an alluvial bench in Redwood Valley. The Sawyer vineyard sits at 1000’ feet elevation overlooking Lake Mendocino planted with head-pruned vines with St. George rootstock.

The Malbec is from Saracina estate vineyard which is marked by black clay and gravelly soils at the base of the foothills. The Petite Sirah is from both Saracina’s steep hillside vineyards and the Niemi vineyard with 20-year-old vines, originally planted without irrigation and dry-farmed for 15 years. The Malbec was harvested on September 24th, Zinfandel on September 25th, and Petite Sirah on October 16th.

The grapes were picked at full maturity, de-stemmed and gently transferred into fermenters with 50% whole berries. They soaked at a cool temperature for four to seven days, at which point native yeast fermentation began in both open and closed top fermenters. The free run juice was aged in 10% new thin-stave French oak and four year seasoned American oak for 18 months, which included native malolactic fermentation. The wine was bottled on June 26, 2020.

The wine is savory, rich, and dense with ripe tannins that wrap around a core of fruit leading to a long, juicy finish.