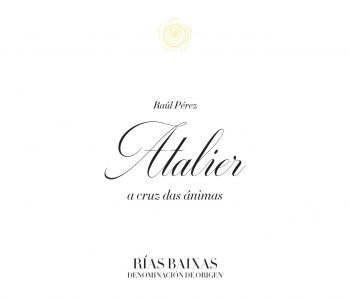 Raúl Pérez Pereira is universally considered to be one of the world’s most visionary winemakers. Since he produced his first vintage for his family’s winery in 1994 at the age 22, he has been at the forefront of the conversation about what is being called “The New Spain”.

Atalier is the exciting new Rías Baixas Albariño project from the redoubtable Raúl Pérez, produced in conjunction with his friend and frequent collaborator Rodri Méndez of the Forjas del Salnés estate in the Val do Salnés subzone.

The origins of Albariño are not universally agreed upon, either by ampelographers or winegrowers. Some believe that the variety is native to the northwest corner of the Iberian Peninsula (insomuch as any grape can be considered truly “native” to Western Europe). Others believe that it was brought over by French monks in the 11th and 12th centuries via the Camino de Santiago. Still others believe its origins to be Germanic. “Alba” is a Latinate root for “white” and “Rin” is the Rhine River, so it’s possible to interpret the name Albariño as “White of the Rhine”.

Wherever it came from originally, there is no dispute as to Albariño’s ancestral home in Spain: the Val do Salnés. The southern zones of the appellation were historically planted more to red varieties like Caiño Tinto, Loureiro Tinto and Espadeiro, and white varieties like Caiño Blanco, Treixadura and Loureiro Blanco (the latter two of which are still widely planted just over the border in Portugal), but the vast majority of those plantations were pulled up to make way for Albariño over the last three to four decades. With very few exceptions, Albariño vineyards that are referred to as “old” in Condado do Tea or O Rosal top out around 35-40 years of age. In Val do Salnés, however, it is still possible to find some very old parcels. Owing to the predominance of sandy soils in the coastal areas, there are even some plots that survived the phylloxera crisis of the late 19th century, thus making them some of the oldest un-grafted vitis vinifera plantings in the world. Atalier Albariño comes from a trio of such vineyards, all within a kilometer of the coast in the village of Dena.

Rodri Méndez, the unofficial conservationist-in-chief of the Salnés Valley, is the person responsible for scouting the vineyards and establishing the agreements with the owners, whom he has known all his life. Rodri’s bonafides are rock solid: he’s a member of the family that founded Do Ferreiro, one of the first commercial wine brands in the Rías Baixas. Its founding pre-dates the formal establishment of the D.O. by at least fifteen years, and it remains a reference point domaine, not just in the Rías Baixas, but in all of Galicia. Rodri has since split off to launch his own projects, but he remains almost religiously committed to seeking out, recuperating and preserving historic sites such as the ones that go into Atalier. You see, old vines are not very sought after in this new world of commodified Albariño. Most folks these days want to farm for kilos, and old vines are notoriously miserly with their yields. Almost every year, parcels of un-grafted, pre-phylloxera Albariño vines are either abandoned by people of advanced age or plowed under to make way for new plantations.

A Cruz das Ánimas’ (trans. “The Crossroads of Souls”) is nothing short of explosive. It leaps out of the glass with aromas of oyster shell and etherized granite and follows through with a palate rich in marine-inflected yellow and green fruits and sporting a powerful surge of acidity.  The grapes come from a pair of Atlantic-adjacent sites in the Cambados area of the Salnés valley. Despite the supercharged acid impression here, the harvest was actually undertaken quite a bit later than the average for the zone. The reason for this is that Raúl likes to wait until the malic acid levels in the grapes go down enough to obviate the need for even partial malolactic fermentation (a practice far more prevalent in the Ríaz Baixas than back labels and tech sheets would suggest). The resulting must then ferments and ages in large, neutral French oak foudres. The oxygenation that occurs during this élevage gives the wine a softer, rounder entry that balances the razor-sharp acids that might otherwise render the wine shrill.