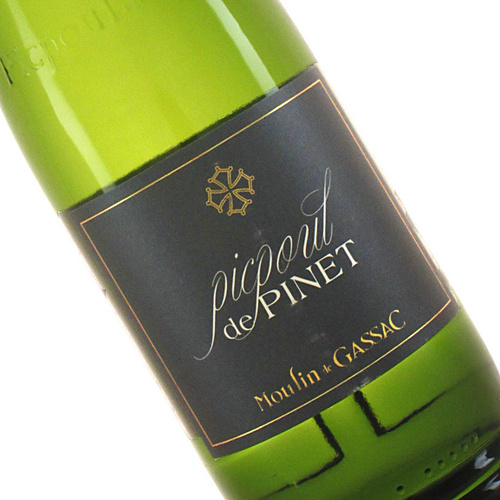 We've carried Picpoul de Pinet since opening day, and consider it to be a staple white wine for its bracingly refreshing taste profile, its ability to go with many foods, and attractive price point.   Along with Muscadet, Picpoul de Pinet is one of the great white wines where you can still pick up world-class exemplars for under $15!

(Picpoul is an old Provençal word for lip-sting, or more accurately lip-smacking). Most of the Picpoul imported to the USA is made in co-ops and doesn't have much sense of place.

Moulin de Gassac is a project of Mas de Daumas Gassac, a benchmark winery in the Languedoc.  Several years back, the folks at Mas de Daumas Gassac began working with a neighboring cooperative to produce fun, full-flavored wines from the surrounding countryside and rocky hillsides.

The goal is to produce wines grown under the same strict vineyard & winemaking regimens employed at Daumas Gassac.  Moulin de Gassac is organic, and from a single vineyard plot, right next to the famed oyster beds of Etang de Thau.

This wine is a classic example of why Picpoul is known as the  "Muscadet of Languedoc."

Intriguing, briny mineral notes in both the nose and mouth provide the perfect backdrop for fish and shellfish. Some melon and citrus flavors keep you coming back for more and the crisp acidity assures that your palate does not tire from this zesty wine.

The soil is limestone and gravel, and the higher elevation and proximity to the cool sea breezes make for a wine with excellent freshness. Picked in the early hours of the morning, the grapes are then fermented by the Daumas Gassac team in stainless steel tanks and left on their lees for 3-5 months.

As a wine-growing district, Languedoc-Roussillon has had to struggle somewhat. However, the area’s reputation as a mass producer of simple bulk wines is beginning to wash off and the district seems to be producing one brilliant wine after the next.

Wine enthusiasts have a real interest to explore among the thousands of vineyards in this area, the largest wine-growing district in France.  The history of Mas de Daumas Gassac is quite extraordinary: In Millau, a little way up in the Cevennes, there is a more than 300-year-old family company producing gloves and other leather goods.

In 1970, the boss, the late Aimé Guibert and his wife Veronique, acquired what was then a very run-down vineyard – a mas – between the town of Gignac and Aniane, just west of Montpelier. They had a dream of growing good quality wine and knew that the soil at the foot of the Gassac hills would be suitable for this purpose.

What started off as a dream in 1970, the “country wine” of Mas de Daumas Gassac has now grown into one of the finest wines in the world.  The Herault’s most famous estate, Mas de Daumas-Gassac is often referred to as ‘the Lafite or First Growth of the Languedoc’ - their wines have achieved ‘cult’ status.

Several years back, the folks at Mas de Daumas Gassac began working with a neighboring cooperative in Sête to produce fun, full-flavored wines from the surrounding countryside and rocky hillsides. The goal is to produce wines grown under the strict vineyard and winemaking regimens employed at this unique domain.

Organic farming is de rigueur and the vinification is closely overseen by the Guibert family. The results are splendidly aromatic wines that bring out the terroir of this Mediterranean region.

It's a perfect foil for oysters, other seafood, and fish. It's also a great aperitif wine.