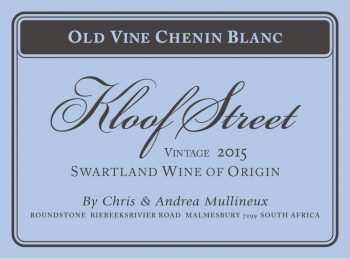 I first tasted Andrea and Chris Mullineux's wines at my friend Fran Kysela's house in Virginia in 2010.  Fran is a Master Sommelier and a huge supporter of South African wines, and he had just started importing their wines.

I was impressed by the wines' purity and sense of place and decided right then and there that we'd be supporting their wines in the shops as soon as they landed in California.

Chris and/or Andrea have poured at the shops several times in the intervening years, and we hosted a great wine dinner with them a few years back.   They hosted Carol and me at their home for a few days in 2015, and then again in the Summer of 2019  and our kinship with them has only grown.

They've been receiving great acclaim for their wines - Parker loves them,  Galloni does as well,  as does the South African wine and lifestyle magazine Platter, which has named them Winery of the Year five times.

They are located near the village of Riebeek Kasteel in the Swartland region of South Africa, and produce a select range of hand-crafted wines from the varying soils of the area.

The Swartland is a beautiful and wild place. The landscape is a series of rolling hills with a few significant outcrops of rock that form the Paardeberg, Kasteelberg and Piketberg mountains. It is not an easy place to establish vines, and is a region that has as much of an influence on the vineyards and people who farm there as the people have on the land itself.

The Kloof Street range is all about freshness, balance and great drinkability.  The Kloof Street Chenin Blanc comes from three sustainably farmed vineyard parcels in different parts of the Swartland: One parcel of 35 year old Chenin planted in the stony Shale and Schist based soils of Kasteelberg, and two parcels of 40+ year-old dry land, bush vine Chenin grown in the decomposed Granite soils of the Paardeberg. After pressing, the juice is racked to tank (85%) and older French oak barrels (15%) for fermentation. Fermentation is with indigenous yeasts and lasts up to 6 weeks. The barrels are racked and blended with the tank fermented portion and then bottled.