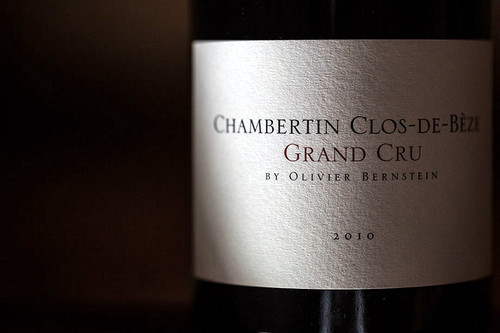 We have a great stash of stunning high-end Burgundies from Olivier Bernstein, one of the most celebrated 'new' arrivals on the Burgundy scene.

His  seven Grands crus and three Premiers crus have a wealth of old vines, which are fundamental to the quality of his wines. All Bernstein vineyard plots, save one, are at least 40 years old; most are between 60 and 80 years old. While officially acting with négociant status, Olivier and his team take responsibility for the vineyard work on their plots. “Viticulture is the very basis of everything. To get grapes of excellent quality and perfect health, the work in the vineyard is absolutely fundamental — and unstinting. It is impossible to make a great wine without a great grape,” explains Olivier.

Born in Touraine to a family where good taste, a sense of nuance, a flair for performance and being different have always been strong values, Olivier Bernstein was surrounded by classical music while growing up. Olivier’s grandfather founded the music publishing house Bärenreiter, which is the industry standard for works by Mozart, Bach, Schubert and Haydn. His parents directed publication of several major classical music labels that are the sine qua non for the most demanding music lovers.

Olivier himself was in the midst of a career in international management with the TGV, traveling the world for the rail industry, when “the culture of taste” in which he had been raised eventually caught up with him. Wherever he found himself – Asia, North America, South America, Europe – wine was the connection to his homeland and a burgeoning passion. Olivier devoted his free time to exploring vineyards, meeting vintners, working the harvests, taking part in winemaking. Finally, realizing his life was about to change trajectory, he obtained a degree in viticulture and oenology in Beaune.

In 2002, at the age of 35, Olivier realized his dream of becoming a winemaker. He purchased an abandoned Mas (literally, “farmhouse”) and selected eight hectares (19.77 acres) of old vines in Roussillon in the south of France. To create his Mas de la Devèze, Olivier bought a tractor and did all the work himself, learning by doing. His small production delighted some of France’s finest restaurants – Pierre Gagnaire, Marc Veyrat, Lasserre, Le Meurice, Taillevent, Ledoyen, Le Crillon – and sold out quickly. Working through good importers, Le Mas de la Devèze swiftly established itself across five continents. Olivier spent the next five years perfecting his methods in his new profession — vigneron. He remains devoted to the values he (and his family) considers essential: hard work, unrelenting rigor and creativity.

“To have become a winemaker through choice rather than because of familial expectation is a distinctive – and liberating – position to be in,” says Olivier, whose passion led him to a complete career change and new life in the vineyards.

The desire to once again work with Pinot Noir was too strong to resist. Olivier had never forgotten his brief stint with Henri Jayer during the vinification of the 2002 vintage. His considerable knowledge of Burgundy and the winemakers there — during the past 10 years he has regularly tasted at such prestigious estates as Domaine de la Romanée-Conti, Bernard Dugat-Py, Armand Rousseau, Emmanuel Rouget, G. Roumier, Anne Gros, Jean François Coche-Dury, Jean Marie Raveneau — enabled Olivier to return to his first love: Burgundy.

In 2007, Olivier created the négociant house which bears his name and produces very small quantities of very high-quality premiers and grands crus exclusively. Olivier works closely with select growers of very old vines; he and his team manage the viticulture in each climat. In 2012, he was able to purchase — a wonderful opportunity and rare occurrence in Burgundy — the Mazi-Chambertin Grand Cru and Gevrey-Chambertin Premier Cru Les Champeaux vines which he had been working with for several vintages.

Here's what's available, all from the 2014 vintage:

Chambertin Grand Cru $679.99 (1 btl abvailable)
95+ Vinous:  Bright medium red. Sexy aromas of sweet red plum, candied red berries, licorice and spices, with darker purple fruit notes emerging with air. Plush, silky, and sweet in the mouth, with red cherry and mineral flavors lifted by rose petal and spices. Finishes very long, with big, dusty tannins clamping down on the wine's pungent raspberry and minerals flavors. This extremely deep wine shows terrific medicinal reserve and will require serious patience. I'd love to be able to taste this, the Clos de Bèze and the Mazis-Chambertin side by side in ten years.
Charmes-Chambertin Grand Cru  $369.99 (1 btl available)
93 Vinous  Dark, bright red. Alluring floral lift to the aromas of raspberry, blood orange and minerals complemented by sweet oak. Densely packed and saline but with pungent red berry flavors giving the wine a light touch. Like some of Olivier Bernstein's other 2014s, this delivers captivating inner-mouth perfume, but there's also a plushness and seamlessness of texture here. Finishes with terrific aromatic persistence and no rough edges. This wine is deceptively accessible today, but it would be a shame not to give it at least a few more years in the cellar.

Clos de Vougeot  Grand Cru $369.99 (1 btl available)
92+ Vinous:  Bright dark red. Pure but subdued aromas of black cherry and herbs; darker in its fruit character than the foregoing wines. Saline and reserved in the mouth, conveying very good texture but rather tightly wound in the early going, with its black cherry, mineral and mint flavors complicated by an herbal element and currently dominated by a strong spine of acidity and tannins.
Chambertin Clos-de-Beze Grand Cru $579.99  (1 btl available)
95 Vinous  Good dark red. Wild, highly complex nose combines dried rose, minerals, smoked meat, tobacco and a note of caramel. Plush and smooth yet with terrific flavor definition and a light touch to its flavors of red berries, spices and dried flowers. Offers outstanding breadth and restrained sweetness, with a late note of tart red berries perfuming and extending the finish. This is incredibly tasty right now but it's hard to believe that it won't go through a closed stage in the bottle.
Clos de la Roche Grand Cru $449.99 (1 btl available)
94 Vinous Healthy dark, bright red. Riper on the nose than the Clos Vougeot, conveying a slightly liqueur-like quality to the aromas of wild cherry, brown spice, white pepper and earth. Round and large-scaled on entry, then rather imploded in the middle palate, with strong soil tones and menthol character currently keeping the fruit in the background. Most impressive today on the brisk, rising, firmly tannic finish, which displays piquant notes of spices and blood orange. Conveys a strong impression of terroir but this will need serious aging.
Mazis-Chambertin Grand Cru  $549.99  (6 btls available)
95 Vinous  Bright ruby-red. Aromas of black raspberry, licorice, menthol and sexy oak. Savory and deep, conveying a juicy quality and spicy high notes to the flavors of purple berries and flowers. This energetic wine finishes very long, with substantial fine-grained tannins and intense notes of blackberry and boysenberry. Showing little in the way of animal character today as the fruit dominates.

Vintage notes by Bernstein:
As early as spring, the 2014 vintage appeared to be precocious. A particularly sunny and dry month of April favored the vines (the budding and flowering were ahead of schedule). These magnificent climatic conditions gave hope for a beautiful harvest. We already knew that a green harvest would be necessary to “lighten” the vines, especially the younger ones which are generally a bit more generous such as our Chambolle-Musigny 1er Cru Les Lavrottes.

The head start acquired during the beginning of the cycle was slightly lost with a typical Burgundy summer: wet and chilly without much sunshine. The ripening of our parcels began with a good rhythm during the end of August, thanks to a thinning of the leaves which airs out the clusters and allows them to dry. The sun, accompanied by winds from the North, came back towards the beginning of September. These are the ideal maturing conditions for maintaining healthy grapes. Once again, the month of September fully played its role.

Starting on the 13th of September, our grapes harvested in the Premiers and Grand Crus parcels were very promising. We began with the Mazis-Chambertin where we found a very nice balance and an agreeable freshness. Our grapes, already sorted several times directly on the vines over the summer, were once again rigorously sorted by our team of harvesters.

The grapes were ripe, healthy, and aromatic. We decided to keep 30% of the stocks for all the batches (50% for the Bonnes-Mares). The fermentation lasted 18 days.

Next, we continued with the barreling (83 barrels in total) during the last week of October. The 10 Premiers & Grands Crus are aged in new casks (50% from the Fontainebleau forest and 50% from the Jupilles forest) crafted by our cooper Stephane Chassin.

The result is a very beautiful and classical Burgundy vintage! Red tints with great depth.

On the palate the wines are mature with a brilliant concentration of small red berries. A vintage full of elegance and minerals, the epitome of great pinot noir from the Côtes de Nuits, with fine tannins, softness, and beautiful lengths.