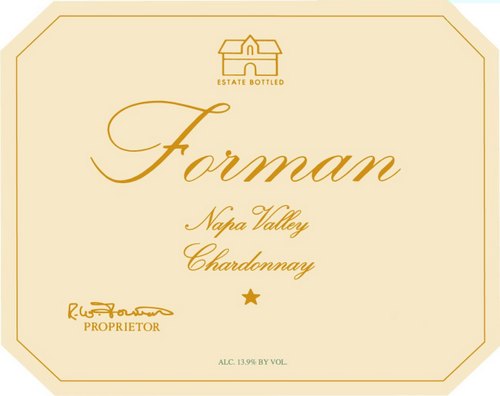 Forman Vineyard was founded in 1983 to fulfill a dream of producing small quantities of classically made Chardonnay and Cabernet Sauvignon.

In 1978, after a three-year search of the Napa Valley for the perfect location, Ric Forman purchased the current winery and vineyard site which is perched on a ridge at the base of Howell Mountain overlooking the town of St. Helena. A remarkable site, it has produced some unusually elegant wines from Cabernet Sauvignon, Cabernet Franc, Merlot, and Petit Verdot.

Forman is founded on a philosophy of winemaking which follows a more traditional approach as opposed to a technological one. Ric began his career in the late 1960s at Sterling Vineyard and then at Newton. During his tenure at Newton, he took a trip to Bordeaux and his viewpoint on winemaking was forever changed. Ric returned to Napa and started to use techniques that he learned in France and were essentially unheard of in California.

Many of these practices are now taken for granted in fine wine production in California. Grapes are gently handled from harvest through fermentation. Small stainless steel fermenters for red wines and new Burgundy barrels for white seem fitting for the need to pay close attention to detail during the winemaking process. Deep caves have been constructed which maintain a cool dark and humid environment in which to age red wine in new French oak barrels. The wines literally age in the soils from which they grew.

With a wonderfully situated vineyard and deliberately planned cellar, Ric and his family are fulfilling a dream in the pursuit of producing the finest quality possible from the estate.

The 2020 Chardonnay is a gorgeous and elegant wine. In this warm, early year, Forman Chardonnay is a bit more tropical and racy than it usually is, but that just makes it easier to drink and enjoy over the next handful of years. Lemon peel, apple, apricot, and mint are all generous in the glass, and there's a terrific sense of plushness that runs through the Chardonnay. The Chardonnay balances natural richness from aging on the lees with a touch of new oak (20%) with the energy that is the result of picking early and also blocking the malolactic fermentation. Lemon confit, marzipan, tangerine oil and white flowers all open up as this super-expressive Chardonnay shows off its character. Deep flavors of ripe pear, lemon curd, and just the barest hint of fresh-cut pineapple. The wood from the ferment adds texture but not much woody flavor, and any notion of the barrel it was aged in was long gone by the time the wine’s pure mineral finish comes into play.