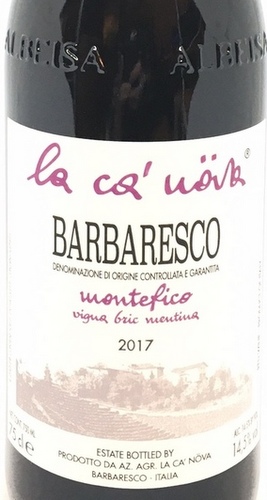 There is the sense that time has stood still at the 18 century La Ca` Nova cascina of the Rocca family which is located atop the famous Montestefano vineyard just as you enter into the village of Barbaresco. This “new cascina” is about 150 years old new.  Since that time, the Rocca family has been the custodian of this estate and pretty much have kept things unchanged. It is still run in a family manner by Marco Rocca, his brother, father, and uncle. It’s a farming family that’s remained pretty much as it always was.

In an era in which producers enlarge their estates and tractor drive throughout the appellation, the Rocca are definitively old school and as close to home as they have always been. They tractor out directly into the vineyard and that’s it.

The Rocca’s have the fortune of owning over 30 acres of Nebbiolo for Barbaresco on two of the appellation’s finest cru vineyards: Montefico, and especially the hill top crest of the vineyard called Bric Mentin, and Montestefano. The remainder of their vineyards are immediately adjacent in Ovello. The two cru are each bottled separately and a combination of Ovello, Montefico and Montstefano make up the regular Barbaresco.

Aging and making of the wines is traditional and pure.  It’s all about pure vineyard expression with no interference. The taster will always recognize the tell tale signs of the chalky, minty, floral Montefico and the darker, exotic, incense-like Montestefano. To those accustomed to wines made in a more manipulated style, the intense, almost pungent aromas might startle at first. But let them settle and these wines will reveal extraordinary and individual vineyard characteristics.

They produce some of the best and most authentic Barbaresco available, as well as producing Dolcetto and Barbera, among other local varieties. The vines are cultivated with the utmost respect for tradition, with careful selection of the grapes that go into the wine, and no chemical treatment on the vineyard. Although their cellar has been modernized to take advantage of the latest winemaking technology, it is still housed deep underground so as to take advantage of the naturally cool and stable environment.

The grapes are carefully harvested by hand in October and then immediately destemmed and lightly pressed. Fermentation follows without temperature control both in stainless steel tanks and in open wooden vats. This process normally takes up to 30 days. The maturation then takes place over a two-year period in large oak barrels, as is the tradition. A six-month bottle storage then completes the maturing process.

Marco is an old-school winemaker who is influenced by the tradition and culture of the region. Thus he produces his wines almost without modern technology. The fermentation takes place without temperature controlled tanks and only with natural yeast. As in the past, Marco uses open wooden vats. The circulation of the mash during the mash fermentation is then carried out with a large wooden spoon. A very exhausting and time-consuming process, but which extracts more color and polyphenols.

Perhaps only the storied Produttori del Barbaresco, which also bottles a wine from the “Montefico” vineyard, can rival the quality/price ratio of La Ca’Növa’s profound 2017 from this celebrated cru site.

Keep in mind that the Rocca family of La Ca’Növa is as deeply rooted in Barbaresco as any, with fifth-generation Marco Rocca blessed with one of the most perfectly positioned slivers of Nebbiolo vines in the entire appellation: His “Bric Mentina” parcel, a south-facing subsection of the Montefico cru.

Montefico is a relatively small, but all the more important vineyard, located on the eastern side of the Barbaresco production area and extending over 20 acres to the south. This Barbaresco from Cru Montefico, Bric Mentina, is characterized by exceptional elegance and balance.

94 points, Vinous:  The 2017 Barbaresco Montefico balances the structural framework typical of this site with the radiance of the year so well. Powerful and intensely mineral, the Montefico is a bit wild in its first approach, yet it has so much character. Bright red berry fruit, chalk, mint, sage and white pepper give the Montefico a brilliant upper register to play off its natural cut. I would plan on cellaring the 2017 for at least a few years.