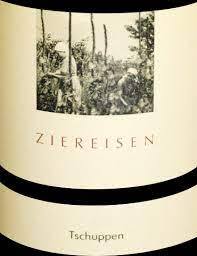 Everything about this wine excites the description of gorgeous, from its beguiling color to its insinuating nose and its juicy, concentrated palate. Big-time Pinot for a small-time price.

The Markgräferland is, together with the Bodensee, the southernmost part of Baden. The soils here are predominantly limestone, which is immediately suggestive of a kinship with Burgundy, especially as there are remarkable climatic similarities between the two regions. Hanspeter Ziereisen is a huge personality whom everyone seems to know. He and his endlessly good-humoured wife, Edeltraud, preside over a compact domaine with an influence out of proportion to its size. He makes wines in a resolutely individual way, having long ago given up the notion of conforming to the straitened mind-set of the local wine authorities. Consequently, most of them are not submitted for approval as AO Baden wines, but rather are sold as lowly “regional” wines – albeit the most expensive of them are amongst the dearest wines of Germany. Call this the “Sassicaia Syndrome”. Without subscribing to the strictest dogmas of “Natural” wine, Ziereisen’s products can be described as nothing but. All vineyard work is manual, all oak barrels are local, no chemicals are employed in the vineyards, fermentations are spontaneous, no wines are filtered and everything is given time to relax on the lees before bottling and in the bottle before release – even if this runs counter to the cycles of the commercial clock. Each product is given a fanciful name in the local dialect, which is strongly influenced by the strange sonorities spoken across the border in Switzerland. Welcome to the wacky world of Ziereisen.

Hanspeter Ziereisen is a carpenter by profession. But at the beginning of the nineties, he was seized by the wine virus, which was a passion for good wine, and he transformed the parental farm estate, into a winegrowing business. The winery Ziereisen today has about 100 hectares of vineyards on which Gutedel, white and Pinot Gris, Chardonnay, Gewürztraminer Pinot Noir and Syrah are cultivated. The wines of Edeltraut and Hanspeter Ziereisen not only taste different than all others in the Markgräfler Land, they are different!

The soils are extremely calcareous. Hanspeter Ziereisen's wines owe their visionary notion of quality, which is unparalleled in the German-speaking context, to the fact that they smell and taste full of character and quite contradictory. He dares to risk fermenting with natural ambient yeasts instead of the usual, safe 'pure culture yeasts and lets his wines mature unusually long on the yeast in the wooden barrel. With curiosity and great openness, Hanspeter Ziereisen devotes himself to the search for the true tradition in viticulture. Thus, over the years, he made his impressively independent white and red wines the avant-garde of spontaneously fermented, gently slowly matured wines in Germany. Hanspeter Ziereisen's Gutedel is one of the best on the market in bottle-aged, but unrecognized old grape varieties in this country. His white wines are disarmingly honest and his very own structured Pinot Noir brimming impressively with the original character and show character strongly the signature of their winemaker.