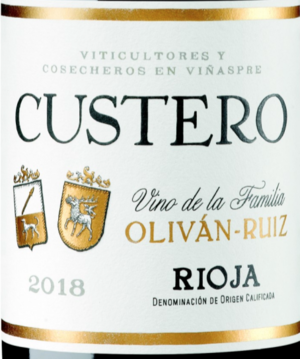 When Roberto Oliván turned 16, he inherited almost 20 acres of vines from his grandfather in the village of Viñaspre in Rioja Alavesa. He became the fourth generation of his family to work the vines in Rioja and soon thereafter he became the first to bottle wine from those vineyards.

Like many modern winemakers in Rioja, Roberto is looking to other wine regions for a model. He is not making the Riserva and Gran Riserva wines. Rather he is making site-specific wines. Custero is from a vineyard that he and his wife planted on marl and sandstone soils with selection massale vines from the family property. There are numerous rootstocks and nine different varieties interplanted. The elevation is around 2000 feet above sea level.

His wines look more to Burgundy or Beaujolais (although with more biodiversity) than to 1980's Rioja, Bordeaux, or Napa.

Organic farming, native yeast fermentation, very low intervention in the cellar, some oak aging but very little noticeable oak flavor, and minimal SO2. All the fruit is harvested together and co-fermented whole-cluster. This is a new look at what 'modern' Rioja can be.  Grapes: Tempranillo, Garnacha, Graciano, Monastrell, Viura, Malvasia, Malvasia Riojana, Garnacha Gris, Calagraño

Custero is their attempt to make a modern version of an old-style wine called Cosechero.  Cosechero wines are made for early drinking, by and for the winemakers and grape growers themselves, using carbonic maceration to make a fruity, easy-to-drink wine.  Just as carbonic maceration in Beaujolais has graduated from the early, very simple examples of Beaujolais Nouveau to some of the top examples in the region today, Roberto and Leyre are raising the bar here too. Many houses still make this style of wine but it is rarely exported.

This wonderful field blend red is sourced from his youngest (four to seven years old) vineyards. Garnacha, the dominant grape, is mixed with eight different red and white (!) varieties, a common practice in traditional vineyards. Aging takes place in cement and oak. This is a refined version of the somewhat rustic wines of yesteryear (so is its label) showing pure, precise fruit and fantastic texture.

The grapes are cultivated using 100% organic, environmentally friendly agriculture and no chemical products. When the grapes reach optimum ripeness, they are harvested by hand.