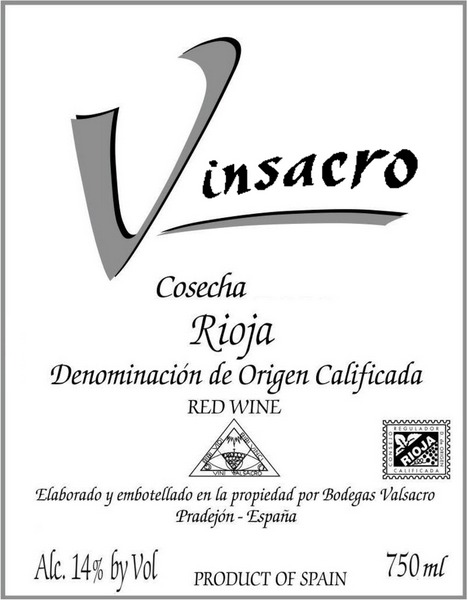 This is a very interesting modern-styled Rioja from very old vines that we have sold in the past for as much as $60 per bottle under the name Val Sacro.  The winemaker and importer have lowered their prices, changed the name of the bottling and we're able to offer it at 50% off, before you factor in the 10% club discount!

The Escudero family has been making wine and growing grapes, for four generations, in the rugged, semi-desert foothills around Grávalos in the southwestern corner of the Rioja Baja region. Over the past few decades, the 4th generation of Escudero siblings - led by Bordeaux-trained winemaker Amador - have transformed the small family "bodega" into a major Rioja wine producer.   Operating from the small Grávalos facility, Amador realized that some of his vineyards offered the potential to do something better (and different).

These old vineyards, some over 100 years planted in the old-fashioned "vidau" style offered the kind of raw material needed to make a modern-style premium wine - a Rioja with a difference. ["Vidau" is a mixed variety vineyard - a field blend ready to pick.] The vineyards include Tempranillo, Mazuelo, Graciano & Garnacha. They have 427 acres under vine, with an annual production of 166,600 9-liter cases.

After fermentation wine from selected tanks is transferred to new French oak barrels for 12-14 months of barrel age. Finally, the best barrels are set aside for Dioro and the remainder used to "upgrade" the normal Vinsacro.

Vinsacro Dioro is a blend of grapes from 100+ year old "vidau" vineyards where many varieties were planted together in the same plot.  Today the grapes are harvested and vinified separately. The final blend depends on the vintage but typically it's Tempranillo (50%), Garnacha (20%) and remaining 30% is a mix of mainly Graciano (10%) & Mazuelo (10%) with a little of Monastrell (5%) & Bobal (5%).

93 pts Vinous   "Sourced from a 100+ year old plot of mixed varieties; aged in new and used French oak barrels for 14 months.  Deep, bright-rimmed ruby. Ripe black and blue fruits on the expansive, spice- and smoke-accented nose, along with suggestions of vanilla, candied flowers and cola. The oak qualities recede quickly on the palate, which displays sappy, deeply concentrated boysenberry, black raspberry and spicecake flavors that show a suave blend of richness and energy. Supple tannins build steadily on the penetrating finish, which leaves cherry-cola and baking spice notes behind."

93 points, Jeb Dunnuck: "I loved the 2015 Vinsacro Dioro Rioja, and this beauty is 50% Tempranillo, 20% Grenache, 10% each of Mazuelo and Graciano, and the balance Mourvèdre and Bobal, all of which spent 12-14 months in French oak. It boasts a deep ruby/purple color as well as smoking good notes of black currants, dried herbs, licorice, and background oak. Medium to full-bodied, seamless, and layered on the palate, with terrific fruit and impeccable balance, I suspect it will shine for over a decade."

92 points,  Robert Parker's Wine Advocate  "The top of the range is the 2015 Vinsacro Dioro, a wine that is only produced in excellent vintages. It's a blend of 40% Vidau (the old field blend) plus 45% Tempranillo and 15% Mazuelo, from a slope in the south of the Monte Yerga called Cuesta la Reina, from a big, 120-hectare plot that has been with the Escudero family for generations. It fermented with indigenous yeasts in stainless steel with a long maceration. It matured in new French (70%) and American oak barrels for 18 months. It's still very young and a little shy, with a reticent nose where the lactic and spicy aromas are intermixed with earthy and dark fruit aromas. The palate is full-bodied but perfectly balanced, compact, powerful and serious, with abundant tannins, extract and clout. This should develop nicely in bottle, given its stuffing and balance. An excellent, modern version of a classical Rioja. 20,000 bottles were filled in June 2017."