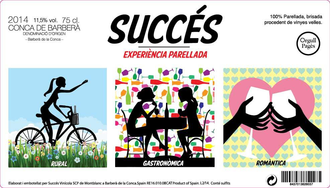 Conca de Barberà is a Spanish Denominación de Origen (DO) for wines located in central Catalonia in the north of the province of Tarragona in the valleys of the rivers Francolí and Anguera. Most of the vines are on dark lime-bearing soils, quite loose and poor in organic matter. Towards the foothills of the Sierra de Prades slate can be found in the rock.  The traditional grapes used are Macabeo and Parellada for  white wines and cava, and Garnacha, Trepat and Tempranillo (known locally as Ull de Llebre) for red wines. However, the Regulatory Council of the DO has also authorized some foreign varieties: Cabernet Sauvignon, Merlot, Pinot noir, Syrah, and Chardonnay. White varieties represent about two-thirds of the vines planted.

Mariona Vendrell and Albert Canela fell in love studying winemaking in Tarragona and started Succés Vinícola in 2011 at the tender age of 20. They exploded onto the scene with a still red wine made with Conca de Barberà’s favorite grape, trepat, which was traditionally used in the region’s rosé cava and first vinified tinto only a decade ago. Albert’s uses his family’s vinous connections to source Succés’ fruit from older, organically farmed vineyards owned by local abuelos and continue to push the boundaries of what's considered possible in the region with good farming and introspective winemaking.

Succés Experiència Parellada is from 40-60-year-old vines, grown on calcareous clay at 1200-1800 feet. Silky, creamy texture with notes of Meyer lemon and mineral. The finish is dry with delicate acidity. Success Vinicola is amongst the first producers to make a still Parellada and is arguably the benchmark producer for the grape. Traditionally one of the main grapes for Cava, Parellada is a late-ripening variety that likes high altitudes. Typically picked in late Oct, pressed, and given 12 hours of skin contact before spontaneous fermentation in stainless steel. Fresh, lively, and bright.  Aged 5 months on the fine lees in stainless steel before being lightly filtered at bottling. Minimal sulfites. Organic