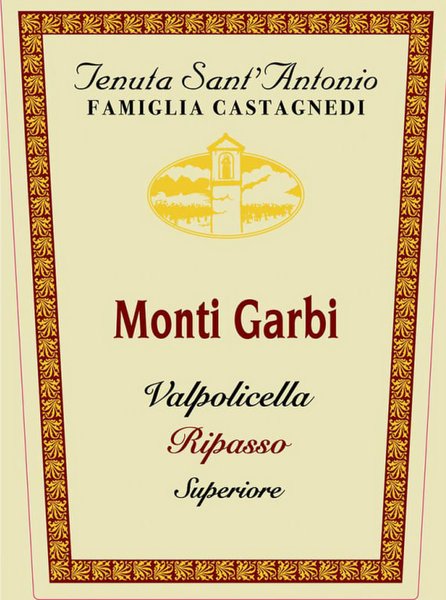 About two decades ago, the four Castagnedi brothers – Tiziano, Armando, Paolo, and Massimo – decided that they no longer wanted to tend their father's vineyards.

They wanted to create a new, modern, and world-class winery that would bring pride to their little corner of the Veneto. They named their winery Tenuta Sant'An­tonio and set out to make Amarone, Valpolicella, Ripasso, Passito, Soave, and Recioto di Soave wines, all from grapes grown on their mountaintop vineyards in Val d'Illasi and Valpolicella.

They've made tremendous progress in a country where the top wineries measure their tenure in centuries, not decades.  While all of their wines have something to recommend, it's the Tenuta Sant'Antonio Valpoli­cella Superiore Ripasso called "Monti Garbi"  that is the perfect juxtaposition of price and quality.

The name Monti Garbi comes from a vineyard in Mezzane di Sotto in the eastern part of Valpolicella. Monti means "hills," and Garbi is Venetian dialect for "rugged, arid, and poor," which describes the poor calcareous and chalky soil of the vineyard.

It's a blend of 70% Corvina, 20% Rondinella, and 10% mixed Croatina and Oseleta.  As you might notice, none of these grapes' names rolls trippingly off the tongue, which is one of the reasons that this wine, which should rightfully cost about $35, doesn't.

Ripasso”  is a unique technique that “re-passes” the Valpolicella wine onto the dried grape skins of Amarone, still warm and rich in sugar after fermentation. This lends the Ripasso greater texture and more powerful flavors. Imagine aromas of red berries and pipe tobacco along with cleansing acidity, and you'll have a pretty good idea of what to expect. Pour a glass for your friends, and they'll swear you spent twice as much as you actually did.“

92 points, James Suckling:   Very intense aromas and flavors of sweet berries, together with notes of coffee, licorice, scorched orange peel and a hint of toffee. Medium-to full-bodied and very flavorful, as the nose predicted, with fine tannins and an almost tangy fruit and spice finish. Feels a little wild, but grabs your attention from start to finish.

90 points, Robert Parker's Wine Advocate:  Packaged in a heavy glass bottle, the Tenuta Sant'Antonio 2018 Valpolicella Superiore Ripasso Monti Garbi is a mid-weight expression with a classic playlist of dried cherry and plum that segue to mild spice, tar and toasted chestnut. Ripasso is the quintessential midway wine between Valpolicella and Amarone, and its all-rounder appeal means it can pair with a wide variety of foods to enjoy in any informal occasion. The blend is 70% Corvina and Corvinone, 20% Rondinella, 5% Croatina and 5% Oseleta. It sees 12 months of oak aging.