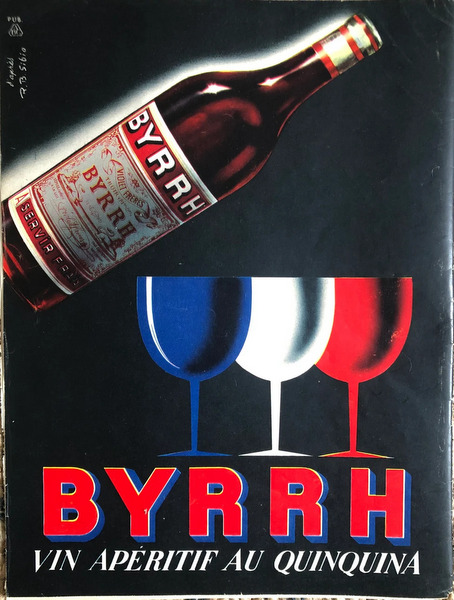 Byrrh is a French red wine-based quinquina**, or fortified apertif, infused with chinchona bark. The chinchona bark gives a distinctive, pleasantly bitter quality to Byrhh. It was imported in the US from the late 1800s until Prohibition and only became available again in the States in 2012. Many types of grapes are used to make Byrrh including Grenache, Syrah, and Muscat.

Byrrh Grand Quinquina is made to the original late-19th century recipe that earned worldwide fame and inspired fifty years of evocative poster art. Byrrh combines a generous, port-like wine and mistelle base with a firm backbone of natural quinine to produce a fruity, refreshing aperitif by itself, with tonic and a twist, or paired with blue cheese. In cocktails, Byrrh mixes well with vodka, gin, cognac, tequila, Irish whiskey, and grapefruit. Byrrh is produced in Thuir, in the heart of French Catalan territory, near the coast and border with Spain.

Add a little gin or tequila to a Byrrh-tonic for a firmer midpalate. Byrrh loves clear spirits—it accepts the astringency of gin, the herbal notes of tequila, or the smokiness of mezcal. Try mixing 1.5 oz Byrrh and 0.5oz of mezcal—this combination is intense, complex, and low-pour cost, whether finished as a long drink with grapefruit and soda, or a stirred drink with your favorite bitters.

In 1866, brothers and traveling merchants Simon and Pallade Violet opened a shop in Thuir with a few small barrels of wine. Simon created a unique recipe from a blend of fine Roussillon wines flavored with plant extracts and enhanced with cinchona bark (quinine). At first called simply “Hygienic Tonic Wine with Cinchona,” the beverage was named Byrrh in 1876. According to one story, the name is a random invention: the letters B Y R R H were simply code letters attached to a few rolls of cloth stored in the haberdashery owned by the Violet brothers. The company expanded rapidly beginning in the late 1800s, and the Violet family built the expansive cellars that exist today. Caves Byrrh contain the largest oak vat in the world, with a capacity of over 1 million liters.

The beneficial properties of the cinchona tree were originally discovered by the Quechua, a people indigenous to Peru and Bolivia, who found it an effective muscle relaxant to calm shivering due to low temperatures. The Quechua would mix the ground bark of cinchona trees with sweetened water to offset the bark’s bitter taste, thus producing tonic water. Jesuit missionaries in the early 1600s brought this back to Rome, where quinine in unextracted form came into use to treat malaria, which was endemic to the swamps and marshes surrounding the city of Rome and responsible for the deaths of several popes, many cardinals and countless common Roman citizens. Quinine was isolated and named in 1820 by French researchers, the name being derived from the original Quechua (Inca) word for the cinchona tree bark, quina or Quina-Quina, which means “bark of bark” or “holy bark”. Large-scale use of quinine as a malaria preventative started around 1850, consumed in tonics or aperitif wines such as these. With other spices and wines selected to balance, many of these quinine aperitif wines became famous and sought out first as delicious and refreshing aperitif drinks.

Byrrh is a fantastic classic aperitif by itself or with a couple of rocks and a citrus peel.  It can be used in many of the same applications as vermouth and in a wide range of mixed drinks. For example: