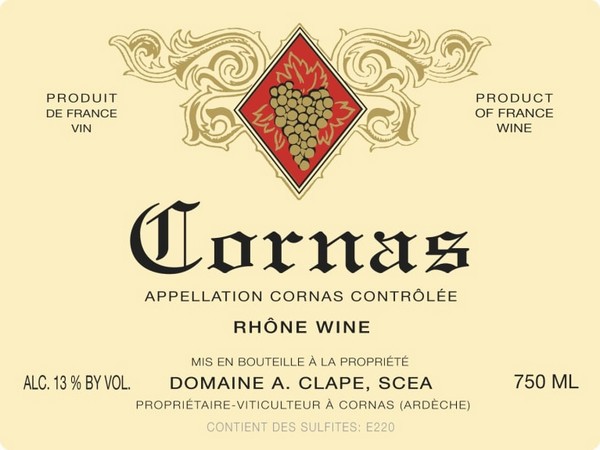 In the world of wine, there are many good winegrowers. However, there are only a very select few who are truly great, and Auguste Clape is among them. Critics and connoisseurs alike all agree that he is one of the greatest pioneers of the Northern Rhône, and his Syrahs from Cornas are among the most celebrated wines of France.

Domaine Clape is legendary in the Northern Rhône. This world-class estate was the first in Cornas to estate-bottle Syrah and sell it under their own name. Auguste Clape’s passion for the region was so strong, he even went on to become its mayor. These wines are ripe, stemmy, and extensively aged in neutral oak. For robust Syrah produced with an ‘Old School’ mentality, these wines are it.

The Clapes have been vignerons for many generations, but the infamous grower strikes of 1906 and 1907 forced his grandfather out of the Languedoc and into the Northern Rhône to start anew from practically nothing. The Clapes rebuilt their fortunes, terrace-by-terrace, along the steep, western slopes of the Rhône River. For many years, the majority of growers in Cornas sold their fruit to négociants.

Auguste was the first to bottle his own wine, which eventually paved the way for such contemporary superstars as Thierry Allemand. Without pretense or fanfare, Auguste, the former mayor of Cornas, is a stately picture of grace and magnanimity—a no-nonsense wise man who is still interested in learning. Today, he works side-by-side with his son, Pierre-Marie, and grandson, Olivier.

Though the Clapes farm only 20 acres, the challenge presented by the rough, tightly stacked terrace vineyards of Cornas is largely enough to handle by anybody’s standards. The dicey precipices make using any machinery in the vineyards impossible.

All work must be done by hand. There are no official rules to their viticultural methodology—they work the old-fashioned way, by instinct, feeling, and common sense. The vineyards sit on granite subsoil, behind the village, with optimal sun exposure. They farm a number of prime parcels, including Reynards, La Côte, Geynale, Tézier, Petite Côte, Les Mazards, Patou, Pied La Vigne, Chaillot, and Sabarotte, the latter purchased from Cornas legend Noël Verset.

Their only secrets: starting with old vines, and optimizing the ripeness of the fruit as best they can. They accomplish this by holding out before they harvest—a risky game of ‘chicken’ where the trick is to keep the fruit on the vine as long as possible while still harvesting before the rains. Individual parcels are vinified separately in old, oval foudres. Long élévages of twelve to twenty-two months add depth to the natural complexity of the wines. The wines are capable of tremendous longevity in the cellar.