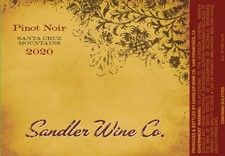 Sandler wines are produced in San Francisco by owner and winemaker, Ed Kurtzman.  Ed's journey into winemaking began quite by accident, when he took a job at a wine shop during his undergrad studies at UMass Amherst.  It wasn't long before Ed realized that wine was more than a passing fancy.  He jettisoned his original career plans, moved to California to sell wine, and soon enrolled in the enology program at Fresno State.  After graduating, Ed embarked on an early career that included stints at a who's who of central coast wineries.  He started out in the cellar at Bernardus, under the tutelage of Don Blackburn and Kirby Anderson.  Next, he spent three harvests as assistant winemaker to Michael Michaud at Chalone before taking the reins as head winemaker for Rob and Diana Jensen's Testarossa Winery in Los Gatos.  It was at Testarossa that Ed's deft touch with Pinot Noir and Chardonnay started to gain widespread attention.  Before long, he found himself in demand as a consulting winemaker, taking on clients including Fort Ross, Freeman, Roar and Mansfield-Dunne while becoming a partner in August West.

In 2003, Ed launched his own label, the Sandler Wine Company, devoted to small bottlings of Pinot Noir, Syrah, Zinfandel and Grenache, from his favorite vineyard and grower sources.

Ed vinifies each lot separately, employing low-input winemaking and minimal handling to promote authentic vineyard and vintage flavors in the final wine.  The Sandler Wine Company line-up changes slightly from year to year based on vintage variables and the addition of new vineyards.

"There are a number of winemakers in California that have a hand in more than one label, but no Pinot Noir vintner that I know of can match the resume of winemaker Ed Kurtzman" - Rusty Gaffney, PinotFile

This 2020 Santa Cruz Mountains Pinot Noir is a first for Sandler.  It comes from the Portola Valley area of San Mateo County, on the eastern edge of the Santa Cruz Mountains appellation.  The spicy Pinot aromas are as intriguing as the zesty acidity and elegance on the palate.  This should drink well from late 2022 through 2030.  100% destemmed fruit, aged for 17 months in neutral French oak barrels.  bottled in February.    Age this wine for several months before drinking, as it was just bottled
Category: Featured Wines