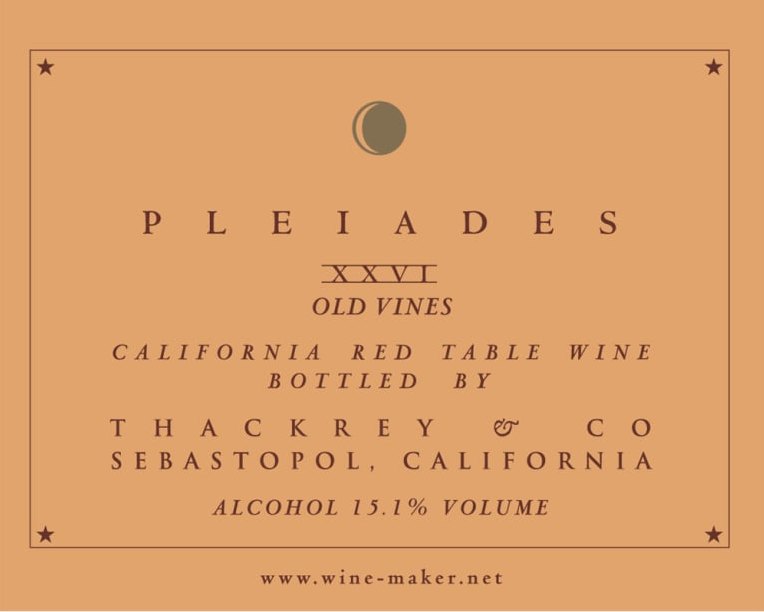 We've been selling Sean Thackrey's Pleiades - the first wine I ever remember calling a cult wine -since we opened in 2003.  Back then, we got a teensy allocation, and we hid the wine behind the counter, doling it out bottle by bottle to a few lucky folks.  Turns out, it was the stingy distributor who created a feeding frenzy, by doling out single cases tied to purchases of other, less desirable wines in their portfolio.   Bad Juju all around, as there was always enough wine to be sold it turns out.

I was overjoyed when Sean switched distributors; and our allocations, while still not unfettered, granted us enough to offer the wine in our Classic Wine Club! This is the twelfth time that we've snagged enough for club members - and it's a delight to be able to have enough to offer!

Sean passed away last month after a ten year struggle with cancer at age 79.  Here's a link to his obituary

Always a blend of up to many different grapes, both red and white, Pleiades is at the very least a very interesting wine, always easy to drink, and nearly impossible to describe.

Sean Thackrey lived in Bolinas and calls out Medieval, Roman and Renaissance texts as inspiration. He makes many of his wines in Bolinas as well, in open top fermenters located in a Eucalyptus grove.  He has built a new facility in Sonoma county for the Pleiades line....

Here's the back label text - same as it's been since the first issue of this non-vintage wine:  "the object of Pleiades Old Vines is to be delicious, delight the jaded, irritate the Wine Police, and generally go well with anything red wine goes well with."

If there's one California winery that's farthest in spirit from the manicured order of the typical Napa estate, it's Sean Thackrey's no-frills property in Bolinas. One hour's drive north of San Francisco in western Marin County, and accessible only via a twisting road that ends at the Pacific's edge, Bolinas exudes the mellow isolation of a hippie commune. That apparently works fine for the eccentric, cerebral Thackrey, who's been making wine there for more than 20 years.

Wine Enthusiast:  "It's very difficult to rate this unusual bottling in a blind tasting. It's a nonvintage dry red wine blended from mature years and has few if any peers in California. It's very tasty because of traits that are usually considered flaws. A tawny color and an aroma like tawny Port lead to a very soft texture, and warm plum, raisin and nut flavors. The wine is rather full in body, light on tannins, and tastes quite mature and mellow."