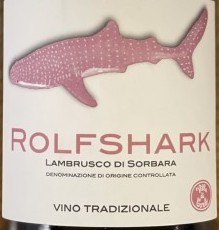 Lambrusco is both the name for a family of grapes native to the Emilia-Romano and (to a lesser extent) Lombardy regions of Italy and for the lightly sparkling (frizzante) wine made from those grapes.  It can be vinified from bone dry to sweet, and is a perfect accompaniment to the foods of the region, especially Ragu, Prosciutto, Salume, and Pizza..

In the US, Lambrusco's reputation was ruined by the import of a highly advertised and treacly version from Riunite, and many consumers still turn their noses up at the idea of tasting Lambrusco.  But dry Lambruscos are amazing and are the perfect foil.

Lambrusco Sorbrara is lightly colored, fragrant and boasting vibrant acidity, Lambrusco di Sorbara, made from the grape of the same name, is the most refined wine of the Lambrusco category. Made around the village of Sorbara north of Modena, the variety excels in the sandy, fertile plains between the Secchia and Panaro rivers.

Historically, Lambrusco di Sorbara was a dry, crisp wine that finished its fermentation in the bottle to produce a light effervescence.

Antonia Munari owns and operates VIlla di Corlo, a family estate in the plains 15 minutes southwest of Modena. It is one of the region’s few properties that is genuinely dedicated to pushing the envelope with organic farming. Furthermore, the entire winery is solar-powered and carbon neutral, vineyards are either certified or in-conversion to organics, and there is concerted, consistent effort to take the entire operation in an ever more “green” direction.

Antonia farms the gamut of Lambrusco sub-varieties and bottles wine under multiple appellations, but the focus is always the same: juicy, clean, user-friendly “restaurant-style” Lambrusco intended to be glugged back in between mouthfuls of prosciutto and pizza.

The “Rolfshark” brand is named after Rolf Kielman who produced the watercolor painting that is depicted on the label. He is the eco-architect who designed the Ben & Jerry’s Factory along with many other eco-friendly properties.

Here we have a perfectly refreshing Lambrusco for the summer; Rolfshark Rosato Lambrusco di Sorbara. This is the lightest, most floral, and most delicate of the Lambrusco family. Produced as a Rosato with fizzy bubbles that tickle the nose and a dry palate with just the right balance of ripe fruit. Perfect for a day by the pool, for your charcuterie platter, or pair with any spicy dish that needs a little cooling.