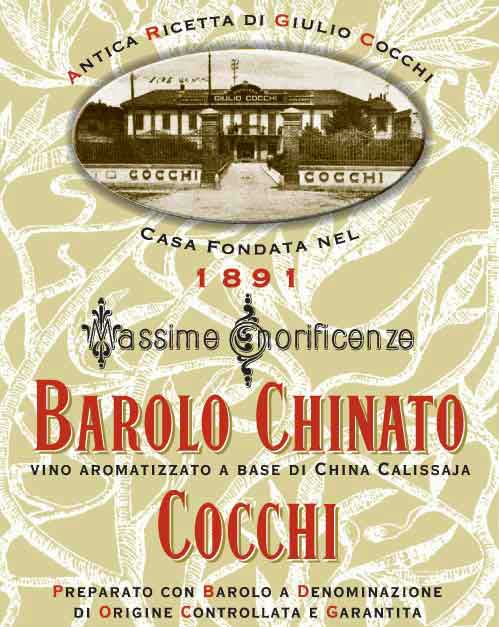 Barolo Chinato may well be the noblest of bitter aromatized wines, claiming wine made from the hallowed Nebbiolo grape, sourced from its home in Piedmont’s Barolo region, at its base. It thus combines the deep richness and floral, tarry complexity of Barolo with a bit of citrus tang and the bitterness (by way of quinine) of an amaro.

Barolo Chinato, like chinatos or quinquinas made from other wines, didn’t arise until the late-19th century, long after the emergence of other bitter liqueurs and aromatized wines like fernets, vermouth, and gentian liqueurs. The reason being that Calisaya bark, which is the source of quinine, had to be imported and thus arrived later to market than locally grown wormwood or gentian.

While it was initially touted for its curative qualities, as modern medicine produced better cures, the marketing of Barolo Chinato evolved to be touted as luxury product.

Renowned in Piemonte since its introduction in 1891, Cocchi Barolo Chinato is a wine of DOCG Barolo infused with quinine bark, rhubarb, ginger, cardamom, cocoa, and a variety of other aromatic spices. Round and rich, yet with the deep back palate one expects of Barolo, this wine possesses the definition necessary to be an ideal digestif or pairing with dark chocolate.

Serve as you would a high-quality port or Madeira, or use in lieu of sweet red vermouth in a luxurious Manhattan. You would not be alone in finding this to be the Rolls Royce (or Maserati) of Italian dessert wines.

Barolo Chinato is a fortified wine that was traditionally drunk for medicinal purposes to guard against fevers and stomach upsets but also gifted as a sign of hospitality. Today it is more commonly used as a digestif and is a wonderful way to round off a meal, as well as being unbeatable with chocolate.

Cocchi's Barolo Chinato still follows the traditional recipe: after a minimum of three years in oak casks, Barolo DOCG wine is infused with the bark of the Calissaja Quinine tree, red china, rhubarb root, gentian, and cardamom seeds, as well as a secret blend of herbs and spices. It is then laid down for another lengthy maturation, allowing the complex flavors to carefully marry.

Chinato takes its name from China, the Italian word for Cinchona officinalis, the native South American tree from which quinine is extracted.

On the nose, heavy, rich, and thick with both sweetness and bitterness. Stewed raisins, dark spiced fruit cake and rich, buttery almond notes dominate, with cherry, menthol touches and gentle ground mixed spice as a background. It’s almost like mulled wine, but with more richness and a definite sweet/sour acidity.

On the palate, a blend of fruit, spice, and chocolate, with tart berry and cherry notes balanced by woody sweetness, herbal bitterness, and a background of spicy and fruity dark chocolate.  The finish is heavy and rich, with red wine tannins mingled with cherry sweetness and gentle leafy bitterness.

In addition to its main use as an after-dinner tipple, try it in these cocktails: