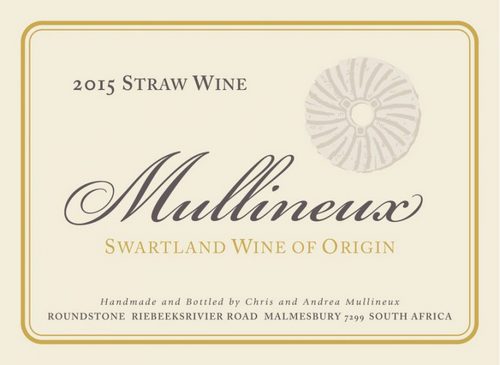 I first tasted Andrea and Chris Mullineux's wines at my friend Fran Kysela's house in Virginia in 2010.  Fran is a Master Sommelier and a huge supporter of South African wines, and he had just started importing their wines.

I was impressed by the wines' purity and sense of place and decided right then and there that we'd be supporting their wines in the shops as soon as they landed in California.

Chris and/or Andrea have poured at the shops several times in the intervening years, and we hosted a great wine dinner with them a few years back.   They hosted Carol and me at their home for a few days in 2015, and then again in the Summer of 2019  and our kinship with them has only grown.

They've been receiving great acclaim for their wines - Parker loves them,  Galloni does as well,  as does the South African wine and lifestyle magazine Platter, which has named them Winery of the Year five times.

They are located near the village of Riebeek Kasteel in the Swartland region of South Africa, and produce a select range of hand-crafted wines from the varying soils of the area.

The Swartland is a beautiful and wild place. The landscape is a series of rolling hills with a few significant outcrops of rock that form the Paardeberg, Kasteelberg, and Piketberg mountains. It is not an easy place to establish vines, and is a region that has as much of an influence on the vineyards and people who farm there as the people have on the land itself.

Mullineux Family Wines was established in 2007 in the Swartland region of South Africa, owned and managed by Chris and Andrea Mullineux. Within a very short time period the winery established itself as one of South Africa’s most celebrated wine brands, both locally and on the international front.

The Swartland has a very unique geology that allows for exploration of its various terroirs through Western Cape classic varieties like Chenin Blanc and Syrah, among others.

Deep golden straw in color, with a rich, viscous appearance. The nose and palate is a complex, enticing blend of dried peaches, apricots and marmalade, with savory, nutty aromas of almonds, marzipan and honey. The intense mouth-feel is balanced by a clean, fresh and very long finish of dried apricots.

This unctuous sweet wine is made from 100% Chenin Blanc harvested at normal ripeness level of 23° Brix then left to dry in the shade outdoors for 2-4 weeks. This allows moisture to evaporate naturally from the berries, concentrating sugars, acids, and flavor. When the grapes have shriveled halfway to becoming raisins they are crushed and pressed whole bunch, and racked to old 225L barrels.
Fermentation takes roughly six months and stops naturally when the native yeast cannot ferment any further. The barrels are then treated differently: Some are not topped but allowed to oxidize slowly, to build complexity. Some are topped every few months but left without sulfur, and the remaining barrels are dosed with sulfur and topped every couple of months to maintain their purity and fruit. After 12 months the barrels are racked, blended, and bottled unfiltered and unfined. The fruit is harvested from old vine Chenin Blanc which give the best acidity at harvest.
97 points, Wine & Spirits:  In the warm, dry 2017 vintage, Andrea and Chris Mullineux hit it out of the park with their straw wine, a sweet wine from air-dried grapes. The couple, who work with viticulturist Rosa Kruger, blended this vintage from two parcels: a 37-year-old vineyard of Chenin on shale on the Kasteelberg mountain in Riebeek Valley, and a cool site on the Paarderberg, the mountain range dividing Swartland and Paarl, where old bush vines grow on decomposed granite. Rather than letting the fruit get superripe, they harvested it at normal levels (22° Brix in 2017) and left it to dry in the shade outside for several weeks. They then pressed the bunches whole and racked the juice into barrels, where they let ambient yeasts do the work of fermentation. When the yeasts petered out—after about six months—the Mullineux dosed some barrels with sulfur to preserve the freshness of the wine, and let others oxidize. The end result slips over the tongue like satin, with notes of stone fruit, broiled pineapple, honey, and marzipan left in its wake. It feels somehow weightless, more like a surround-sound experience than a direct hit, and leaves the body tingling. At 308 grams of sugar per liter, and 11.3 grams of acidity, it’s likely to last for decades in the cellar.
94 points,  Decanter
Immense sweetness and concentration on the palate, with an unctuous texture infused by riveting acidity. Spicy, stem ginger, tropical fruit, honey-baked quince and apple flavours, along with a suggestion of panettone. This is a long, layered and vibrant sweet wine style. Drinking Window 2020 - 2032
Category: Featured Wines